Releasing the trace gas from Imperial

The plumes of pollution from London and seven other regions in Europe have been tracked and analysed thanks to the help of Imperial undergrads.

The pollution monitoring was part of a larger project to analyse the situation across Europe and its major pollution centres. The team spotted some long-range transport of particles across Europe, and are now analysing the full dataset.

To model pollution from major cities, scientists need accurate measurements to base their models on. The EMeRGe project (Effect of Megacities on the Transport and Transformation of Pollutants on the Regional to Global Scales), led by the University of Bremen, Germany, has been gathering direct measurements of city pollution to help in this effort.

Using a special research aircraft named HALO (High Altitude and Long Range Research Aircraft), the team have been conducting flights around Europe designed to single out the pollution from different cities. They can then see how these individual ‘plumes’ of pollution disperse and how the chemical components of them change over time, as they react and break down. 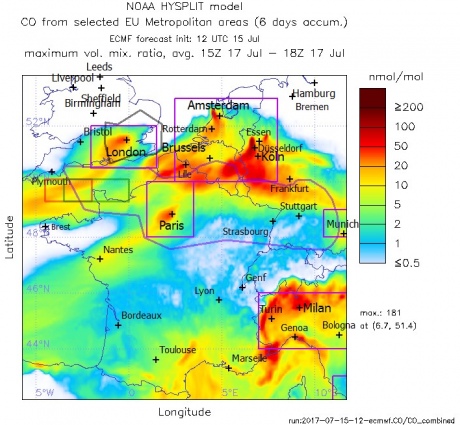 Measuring the plume over London directly offers challenges that can impact the science, for instance, a lot of airspace is restricted or very busy. This is a problem for the research aircraft as it needs to fly at different altitudes as well as locations in order to build up a three-dimensional picture of the plume.

This requires meticulous pre-flight planning using weather forecasts and air mass dispersion models as a guide, and constant communication with air traffic control as real-time conditions impact these plans during the flight.

It was fantastic to have been able to contribute to the EMeRGe project, and we are looking forward to seeing the full set of results after the project ends.

The team therefore decided to measure the plume after it had a travelled over the coast. But to make sure they were measuring the correct mass of air that contained London pollution, a ‘tracer gas’ needed to be released in the city.

This is where undergraduate physics students Rhidian Thomas and Rachel Wu came in. Under the supervision of Dr Jonathan Murray from the Department of Physics and with support from the Grantham Institute, Rhidian and Rachel released a non-toxic and inert (unreactive) tracer gas on two occasions, once late at night and early one London morning.

They also took samples of the London air before the chemical was released, during the release, and a couple of hours after, so the team could get an idea of the initial pollution plume chemistry.

Rhidian said: “It was great to get a taste of how measurements of atmospheric variables are actually taken in the real world. We got to see both sides of the story – the satisfaction of taking a good set of data, but only after a hiccup or two with the tracer release mechanism (and a 4am start for good measure)!

“It was fantastic to have been able to contribute to the EMeRGe project, and I know that we (and others in the department) are looking forward to seeing the full set of results after the project ends.”

The pollution tracking project is led by Dr Hans Schlager from the German Aerospace Center Institute for Atmospheric Physics and Professor John Burrows of the University of Bremen.

Ultimately, the results of the flights will be compared to space-based observations to make sure pollution models are as good as they can be. The team will also repeat the experiment over major Asian cities in 2018, to get a picture of how the pollution, and weather regimes, differ.

Dr Heather Graven, a lecturer in Physics and Rhidian and Rachel’s Undergraduate Research Opportunities Programme (UROP) supervisor, is currently initiating new measurements of greenhouse gases and air pollution on the Huxley building roof in South Kensington, the same place where Rhidian and Rachel released the tracer gas and collected samples for EMeRGe.

The new measurements are part of a European Research Council Starting Grant project to understand the sources of greenhouse gases and air pollution in London and the UK.