Some of the team at the 'Make a Supernova' demo stand

The Plasma Group show the public &apos;How to Make A Supernova' at the Royal Society Summer Science Exhibition 2017. 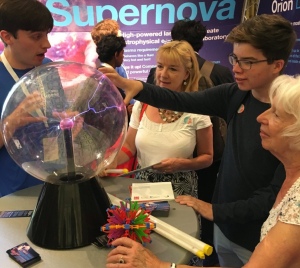 Visitors with one of the interactive demos

The Royal Society hosts the Summer Science Exhibition every summer to spread awareness of cutting-edge science, broaden curiosity in the subject as a whole, and encourage interest in STEM career opportunities. The Exhibition welcomes over 15,000 guests to visit 22 different stands, which showcase the latest in scientific advancements over a week in July.

Dr. Francisco Suzuki-Vidal, the lead organiser of the ‘How to Make A Supernova’ stand on behalf of Imperial College wanted to showcase a field of plasma physics which is not necessarily widely recognised. This field is known as laboratory astrophysics and is essentially science that involves recreating the conditions of space in laboratories on Earth. Although it sounds mind blowing to think that scientists today can recreate conditions such as supernovae, the most violent and powerful events in our Universe, it has been done before. Supernovae are massive dying stars that end their lives with a bang before turning into a neutron star or black hole. These explosions can outshine entire galaxies for a brief moment and eject matter in all directions at speeds close to 10% of the speed of light. On top of that, supernovae radiate more energy than the Sun will in its entire lifetime. 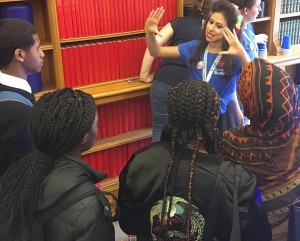 Meriame in action at the event

Stars explode in this way when they run out of fuel, since there is no force from the star’s internal fusion reactions to push against gravity. Instead, the core collapses under the force of gravity and huge shock waves are sent outwards sending matter out in all directions. Thus, supernovae are seen as extremely powerful events and it seems almost impossible to think that they can be recreated in the laboratory.

Scientists can simulate supernova explosions in the laboratory with lasers. Powerful lasers such as Orion at AWE, can create extreme conditions and produce plasmas, the fourth state of matter. This form of matter is essentially a really hot gas, so hot in fact the electrons cannot remain bound to their respective nuclei. In this case, the plasma is created by focusing a high-power laser onto a small target, the target vaporizes, becomes a plasma and shock waves are seen to spread outwards. This shock wave spreads into a low-density gas, mimicking the shock waves seen in a supernova.

Some of the team with the Air Vortex Cannon demo

The teams from Oxford, AWE and Imperial met up at the Royal Society Summer Science Exhibition this summer to show off the field of laboratory astrophysics and how the collaboration between astrophysicists, laser scientists and plasma physicists have allowed for this field of science to exist. The teams created an interactive stand encompassing these three fields showing members of the public the beauty of lasers, plasmas and astrophysics. A highlight was the ‘Air Vortex Canon’ demo, developed by Dr. Francisco Suzuki-Vidal and Meriame Berboucha, members of the Plasma Group. Visitors young and old were excited as they tried to create their own ‘supernova’ on at the interactive demo.

You can find out more about this work in the following Nature paper.

The above news story is based on a Forbes article written by Meriame about this research. 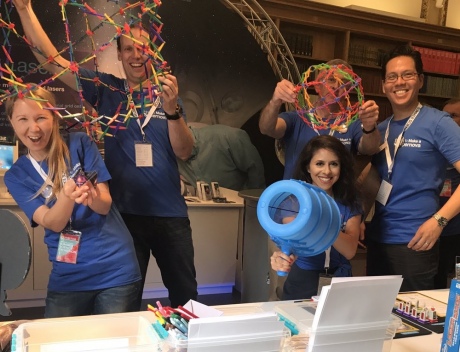