Two Imperial staff have been recognised for their outstanding contributions to the creation of a level playing field for women academics.

The Julia Higgins Awards are named in honour of Professor Dame Julia Higgins, who is now a Senior Research Investigator in the College’s Department of Chemical Engineering and President of the Institute of Physics (IOP).

Professor Higgins presented the awards at a celebration event alongside Imperial’s Provost Professor James Stirling. Two awards were made in 2017, to Dr Cleo Kontoravdi and to Dr Jess Wade. 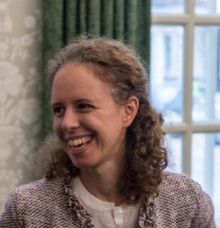 Dr Cleo Kontoravdi was recognised for her work on improving her department’s culture, including developing a number of initiatives to support the postdoc community. She led on the establishment of an annual postdoc symposium and the introduction of a new award scheme to recognise the research and professional contributions of the department’s postdoctoral researchers.

Dr Kontoravdi is a Reader in Biosystems Engineering in the Department of Chemical Engineering and has been the departmental Athena SWAN coordinator since 2012, leading the successful renewal of the department’s Silver award in 2014.

She said: “This award represents a real culture change that is happening in our department. We looked at feedback from staff and really thought hard about how to make the department a better workplace for everyone.”

Dr Jess Wade received the award for her outreach work with schools and her work to support women in physics at the College and beyond. She is a Research Associate in the Department of Physics, having completed her undergraduate and postgraduate studies at Imperial. In 2016 she won the IOP annual Jocelyn Bell Burnell award in recognition of her research and exceptional public engagement work, and has been involved in the IOP’s Improving Gender Balance group. 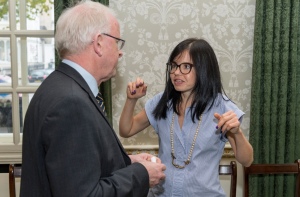 Jess discusses her work with the Provost

Jess said: “I’d previously done a lot of talks and sessions for school students, but, with the support of the Institute of Physics, have focused on working directly with their teachers. Having teachers’ (and parents’) support is one of the things that can really affect whether girls decide to take physics to A-level, so the more we can break down stereotypes amongst teachers the better.”

This summer Jess was invited by the US State Department on their International Visitor Leadership Programme ‘Hidden No More’, visiting DC, Nebraska, Chicago, and LA to discuss initiatives to recruit and retain women in science. She said: “The group consisted of 48 people from 48 different countries. It was fascinating to learn about the status of women in science in other countries, and hear from others about what has and hasn’t worked. I was proud to share insights from Imperial – Imperial is really trailblazing in the initiatives we have here.”

Speaking at the event, Professor James Stirling said: “Promoting gender equality has been a priority for me since I joined the College. We still have a lot of work to do, but we have made outstanding progress. I would like to take the opportunity to thank all the colleagues whose hard work, dedication and commitment has got us to this point.”

The event also celebrated Imperial’s most recent Athena SWAN successes. The Athena SWAN Charter was established in 2005 to encourage and recognise commitment to advancing the careers of women in science, technology, engineering, maths and medicine, and was expanded in 2015 to recognise work undertaken in arts, humanities, social sciences, business and law and to cover staff in professional and support roles. Imperial was the first university to achieve an institutional Silver award on the new expanded criteria.

Nominations are now open for the 2018 Julia Higgins Awards, with a deadline of Friday 9 February 2018.