Nearly 300,000 more could die from malaria after proposed cuts to US funding Imperial researchers have modelled the number of additional malaria cases and deaths that will occur by 2020 following proposed cuts to US funding.

The US President’s Malaria Initiative (PMI) has been providing support to malaria control programmes in 19 African countries since 2005.

Funded by the US Agency for International Development USAID), in 2015 it represented more than a fifth of the global budget allocated to tackling malaria. 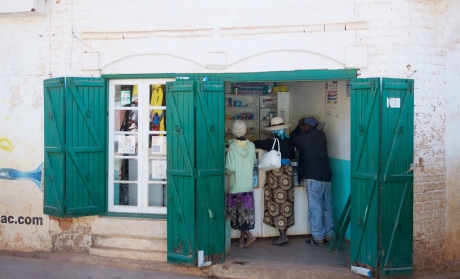 In May 2017, US Congress published a budget justification document, which included a proposed 44% reduction to malaria control for 2018.

Using a mathematical model of malaria transmission developed by the MRC Centre for Outbreak Analysis and Modelling at Imperial College London, the research found that the PMI has prevented 185 million cases of malaria over 12 years. It has also saved 940,049 lives, the majority of which (77%) would have occurred in children under the age of five.

If a cut of 44% to the PMI is implemented in 2018, the study estimated that from 2017 to 2020 there would be an additional 67 million cases of malaria and 290,649 deaths from malaria, compared to a situation where current levels of funding are maintained for that period.

Lead author and Research Associate at the School of Public Health, Imperial College London, Dr Peter Winskill said: “PMI has contributed a lot to the funding of malaria prevention and treatment, so we knew the proposed reduction would have a big impact. However, when we actually modelled the figures and saw them in absolute terms, the sheer number of cases and deaths was very alarming.”

“Our results highlight the fragility of the gains we have made in malaria control and show that, even when huge progress has been made in tackling this disease, these improvements will be reduced if cuts are made to central funding streams such as the PMI.”

The study, published in PLOS Medicine, evaluated the impact of the PMI to date and forecast the impact of the proposed cuts over the next four years. It used data at a sub-regional level i.e. for districts and states on how and where PMI funds are being spent, and on the level of cases and deaths from malaria.

From the modelled results, the researchers estimated the cost-effectiveness of the PMI to be US$20.60 per malaria case and US$4,801 per death averted. 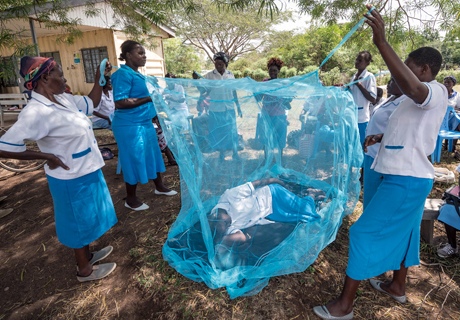 Aid workers explain how to use malaria nets to villagers

The researchers also used a measure of cost-effectiveness called the disability adjusted life year (DALY). This describes the price of each year lost due to ill health and is the standard measure of overall disease burden. They found that cost per DALY averted was US$94. Translating this into the percentage of per-capita gross domestic product (GDP) of the countries funded by PMI, the figure ranged from 2% to 57% depending on the country.

The World Health Organisation threshold for an initiative to be considered cost-effective is less than 300% so this indicates that the PMI is highly cost-effective. 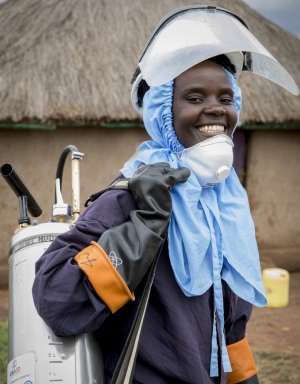 Jessica Scranton - a sprayer in Kenya

Dr Winskill added: “Although the figures on cases and deaths from malaria are very striking, the calculations of cost-effectiveness are also essential to depict how successful the PMI has been at preventing malaria and the financial value of this investment.”

The research focussed on the three main interventions funded by the PMI: insecticide-treated nets, spraying homes with insecticide and antimalarial medicines.  PMI also funds other schemes, such as giving anti-malarials to pregnant women at routine antenatal visits and training health professionals, which were not included in the modelling.

In addition the study did not consider possible indirect effects of PMI, for example improvements in infrastructure, which encourages interventions by other funders and reductions in the strain on health systems from the decrease in malaria cases.  This means that the study’s estimates may be conservative, and the number of additional cases and deaths could be greater than reported.

Dr Peter Winskill is working on a project funded by the Bill and Melinda Gates Foundation to develop mathematical models in order to guide and evaluate malaria control and elimination programmes in malaria endemic areas.

'The US President's Malaria Initiative, Plasmodium falciparumtransmission and mortality: A modelling study' by Winskill, P, et al. is published in PLOS Medicine. Reuters - Proposed cuts in foreign aid could cause malaria resurgence