An Imperial researcher filmed his daring descent into one of the world's most spectacular active volcanoes.

Professor Christopher Jackson, from Imperial’s Department of Earth Science and Engineering, took part in an expedition to the Nyiragongo volcano, which is currently airing as a two-part documentary on BBC Two.

Nyiragongo is located in the Democratic Republic of Congo, Africa, and contains a massive boiling cauldron of molten rock - the world's largest continually active lava lake. It is one of the most dangerous volcanoes on Earth, erupting twice in the last 50 years - devastating the nearby city of Goma. 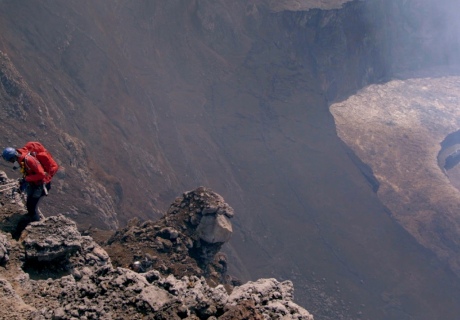 Professor Jackson about to climb into Nyiragongo's crater.

Professor Jackson and an international and local team of scientists mounted an expedition to study the volcano in an attempt to discover the presence of warning signs that might indicate when it is building towards a new eruption, so they can alert the people of Goma before it erupts again.

During the making of the documentary, Professor Jackson managed to record his own video diary of his extraordinary experiences. Watch him climb and descend into the Nyiragongo volcano and set up a base camp inside the caldera, while the BBC crew fly their state-of-the-art drone to capture footage from inside the bubbling, seething, lava-filled volcano.