The award-winning journalist and broadcaster discussed her investigations into the scientific arguments behind gender inequality for her latest book, Inferior: How Science Got Women Wrong and the New Research that’s Rewriting the Story .

The talk was introduced by Professor Stephen Curry, Assistant Provost (Equality, Diversity and Inclusion), a new position at the College.

He said: "I see part of my role as assembling the evidence in order to make the case that valuing diversity is not only the right thing to do but the smart thing to do. I hope that I can raise the profile of what has to be a central and shared endeavour.

“As soon as I had read Angela Saini’s book I knew that I wanted to invite her to come to talk at Imperial and am delighted that she is here today. Her book provides a cool and measured look at the ways in which science and scientists have got women wrong over the years and the relatively recent research that is helping to put that right. It provides solid ground for a much needed spur to action and I hope that at Imperial we can play our part in that endeavour.” 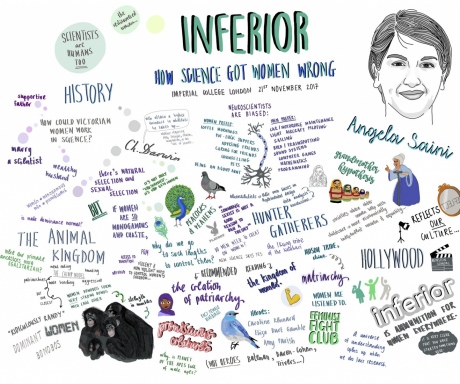 Angela presents science programmes on BBC Radio 4 and the World Service, and her writing has appeared in various publications including New Scientist, the Guardian, the Times, Vogue, the Economist and Wired. Her latest book, Inferior: How Science Got Women Wrong and the New Research that’s Rewriting the Story, was published this year.

She said: “What I wanted to do with the publication of this book is to give women and men a new narrative for themselves, and to give ammunition to those who say they're not good enough because science has said they’re not good enough – as well as encouraging people to be more critical about science.”

“We see this type of thinking everywhere today,” she said. “It's a body of work that promotes this kind of theory that we belong to different spheres.

Science is a process. Assuming that we have all the answers now is a mistake.

The field of evolutionary biology has contributed to this view, according to Angela. Some theories of how we evolved as a species have been used to explain modern behavioural differences between men and women.

For example, the man’s role in hunting in early hunter-gatherer societies is often highlighted. However, Angela said that scientists have actually discovered a lot of female hunter gatherers in tribal communities where the women both hunt the food to feed their family and are involved in raising the children.

“There's just no way to look at this evidence and decide that men are somehow designed to be out in the world and bring home the bacon. It's just not how hunter gatherers work.

“If exceptions like this exist, then it cannot be biological for men to be in charge. There is no reason that equality isn't possible if we want it. It's biologically possible.”

Discussing evolutionary biology, she also spoke of Charles Darwin’s view that women were inferior to men, and how this view reflected that of Victorian society as a whole towards women.

“To be a scientist as a woman in Victorian times was virtually impossible. It’s not that far back that things actually changed,” she said.

“In some ways we still live in the shadow of those Victorian scientists. The idea that women are psychologically different to men hasn't really changed.”

Angela questioned whether Darwin’s ideas of female behaviour are actually grounded in science: “What Darwin saw as natural behaviour of women may not have a biological basis. It is the production of millennia of society, culture, religion, laws.

“If he can make those mistakes based on his personal prejudices then all of us can, and that's a good lesson to learn.”

She concluded by saying: “Science is a process. Assuming that we have all the answers now is a mistake.”