Exhaust fumes, soot and dust spewed out from road traffic in the UK capital may be putting the health of thousands of unborn babies at risk.

The findings come from a study of more than half a million infants, which suggests that pregnant mothers exposed to air pollution from London’s busy roads are more likely to give birth to babies that are underweight or smaller than they should be. When it comes to traffic-related noise, however, they found no conclusive effect on babies’ health.

According to the authors, cutting the average concentration of fine particle pollution emitted by the city’s road traffic by just 10% could prevent around 90 babies a year (3% of cases) being born with low birth weight.

They add that the findings could be applicable to other cities in the UK and across Europe with comparable levels of road traffic pollution, highlighting the need for environmental health policies to improve air quality in urban areas.

Previous studies have shown a link between air pollution, pregnancy complications and childhood illness, but studies of noise pollution in pregnancy have provided conflicting results.

In the latest study, published in The BMJ, a group led by Imperial College London looked at the link between exposure to air and noise pollution from road traffic during pregnancy and the effect on measures of birth weight – both low birth weight (less than 2500 g) and being born small for gestational age.

Carried out at the MRC-PHE Centre for Environment and Health at Imperial College London and Kings College London, the research focused on records of more than half a million (540,365) babies born in the Greater London area between 2006 and 2010, along with the mother’s home address location.

“Our study has shown that a small but significant proportion of babies born underweight in London are directly attributable to exposure to air pollution, particularly to small particles produced by road traffic,” said Dr Mireille Toledano, from the School of Public Health at Imperial and senior author of the research.

She added: “Babies born with low birth weight or who are small for their gestational age, are at increased risk of dying within their first month, as well as diseases in later life, such as cardiovascular disease. Any policies aimed at reducing road traffic pollution in urban environments could therefore help to reduce the health impact on unborn babies and their life-long disease risk.” 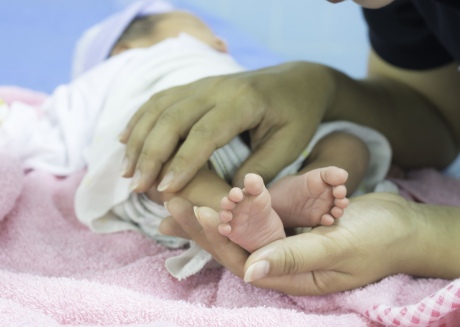 Cutting fine particles emitted by the road traffic could prevent around 90 babies a year being born with low birth weight, say the researchers

They add that the study’s limitations include the potential for some misclassification of exposure –for example, because exposure was estimated at the mother’s residential address, and did not account for exposure at other locations – and that estimates were used for some other risk factors, such as passive smoking in the home.

However, the researchers are confident the study data are robust and provide evidence for policymakers in the UK.

They explain that while effects of traffic noise cannot be ruled out, the evidence of an association between exposure to air pollution and the poor health of unborn babies in the urban environment is clear, even though the biological mechanisms of road traffic pollution on public health are not fully understood.

“While the research did not show an independent effect of noise on birth weight, we cannot rule it out as a potential factor.

“What is clear, however, is the effect that air pollution generated by road traffic is having on foetal development. We have shown that exposure during pregnancy to traffic pollution is having a detrimental effect on the health of babies in Greater London.”

‘Impact of London's road traffic air and noise pollution on birth weight: a retrospective population-based cohort study’ by Rachel B Smith et al., is published in The BMJ.