In pictures: Imperial Fringe took visitors on a walk through air

Hundreds of visitors took shelter from the cold to breathe in a festive evening and investigate the invisible gases that flow around us.

'Walking in the Air', the latest in Imperial College's Fringe series, welcomed members of the public to learn about all things air-related, from discovering how clouds are formed to discussing ways to reduce pollution levels with researchers from the Grantham Institute - Climate Change and the Environment and across the College.

The air around us contains many gases including carbon dioxide and methane, which are released as a result of human activities, such as agriculture and power generation. Increases in these greenhouse gases have been shown to have detrimental effects on the climate and our health.

The Grantham Institute funds research that focuses on expanding our knowledge of the atmosphere and understanding our interactions with it.

Dr Heather Graven, a Grantham Affiliate, used bubbles to show how pollution moves around the UK and explained how scientists use rooftop weather stations to monitor the concentrations of greenhouse gases. These measurements are useful to policymakers that need to know if the UK is on track to meet the carbon budget, the legal limit for emissions in a five-year period. 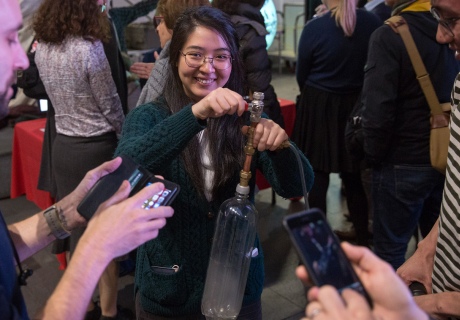 Clouds are accumulations of water droplets that usually form around very small particles, known as aerosols. These aerosols include desert dust, soot or compounds called sulphates. Human activities have modified the properties of clouds by increasing the amount of aerosol in the atmosphere.

Visitors created their own clouds in a bottle and had a chance to speak to Dr Ed Gryspeerdt, a Grantham Affiliate, about how clouds move across the globe, what makes a cloud rain and how human activities are affecting clouds.

Professor Jo Haigh, Co-Director of the Grantham Institute presented the 2017 Children’s Christmas lecture. She took the audience journey back through time, up through the atmosphere and around the solar system to explain the science behind global warming, and looked hopefully to a future where politics, science, new technologies and the young people of our world come together to tackle the worse effects of our changing climate. 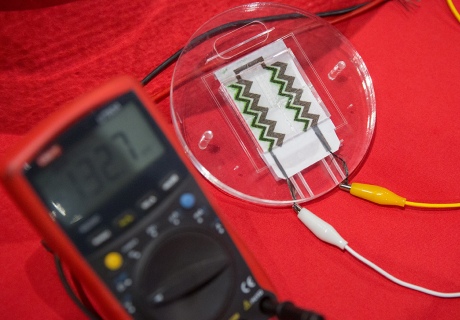 Dr Andrea Fantuzzi, a Grantham Affiliate, and Dr Marin Sawa have created a two-in-one solar bio-battery and solar panel by printing cyanobacteria and circuitry onto paper. Cyanobacteria are photosynthetic micro-organisms that have been on Earth for billions of years. They are thought to be the primary reason why the Earth’s atmosphere is oxygen rich.

When printed onto the paper, the micro-organisms produce small amounts of electrical energy as they photosynthesize, which can be harvested to power small environmental sensors. Printing in precise patterns means these sensors could be disguised as wallpaper in the home to monitor air quality.

Visitors were able to watch bubbling algae bioprinters in action and learn about their potential use in green wall sensors of air quality.

Visitors were able to watch the oxygen bubbling off some of our plant friends and learn about the process of photosynthesis directly from Imperial's experts. James Murray, a photosynthesis expert, explained how his team are looking to improve the efficiency of photosynthesis by modifying the carbon fixation reactions. 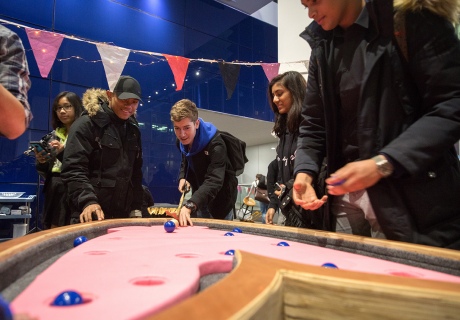 The National Heart and Lung Institute’s Aarash Saleh explained the benefits of a new gene therapy for treating cystic fibrosis through a friendly game of pool on our lung-shaped table.

Cystic fibrosis is a lethal, hereditary disease that affects around 10,000 people nationally and over 90,000 worldwide. Patients’ lungs become filled with thick sticky mucus and they are vulnerable to recurrent chest infections, which eventually destroy the lungs.

The new therapy replaces the faulty gene responsible for cystic fibrosis in patients' lungs by delivering a normal copy of this gene into the cells in the lung lining.

Imperial's Department of Aeronautics revealed the secrets of how air flows around us using the Schlieren technique, a form of photography that has been around for 150 years. This technique uses the power of refraction to visualise density differences in air cause by temperature variations. Guests were able to watch cold air pour out of bottles and explode from balloons.

Researchers use this technique in wind tunnels to look at the flow around objects such as aircraft. 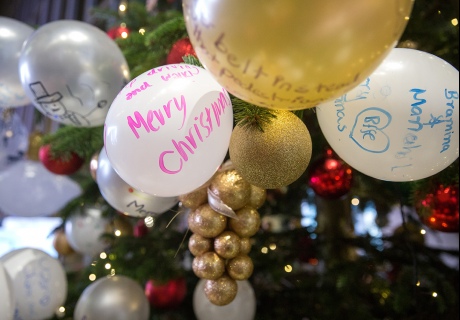 I, Science magazine, the student science magazine of Imperial College London, invited Fringe attendees to blow up festive balloons with their concerns and solutions around air quality and pollution in the capital.

"A wider congestion charge", "hydrogen cars" and "more public transport use" are just a few of the ideas used to decorate the balloons.

The next Fringe event is taking place on the 18 January at the South Kensington. At Intelligence Redesigned you can meet virtual personal assistants, electronic heart surgeons, AI film critics and a robotic companion for autistic children with a knack for impressions as we look at how artificial intelligence might shape our future.

This event was supported by the Grantham Institute - a world-leading authority on climate change and the environment and one of Imperial’s Global Institutes, established by the College to promote inter-disciplinary working and to meet some of the greatest challenges faced by society.

The Grantham Institute has been driving forward discovery, translating innovations into applications and communicating academic knowledge to businesses, industry and policymakers to help shape their decisions since 2007, and is celebrating its tenth anniversary this year.

To hear more, sign up to the Grantham newsletter.