Community members and medical professionals gathered at the Bush Theatre for a play exploring the impact of mistakes in the operating theatre.

Mr David Alderson, a consultant Ear, Nose and Throat (ENT) Surgeon and educator based at Torbay Hospital, wrote the play shortly after completing the MEd in Surgical Education at Imperial. He has been working in collaboration with colleagues from the Master’s programme and beyond to get the play seen. The current project has been supported by Imperial’s Societal Engagement Seed Fund, which was established to support staff and students to engage the wider public with our research and education.

Events like this help build and cement trust between Imperial and its new neighbours.

David’s MEd research project looked at how surgeons develop expertise in the operating theatre, listening to their stories, and the stories of those with whom they work. The experience of making and living with mistakes emerged as a central and common concern, uncovering profound and long lasting effects on medical professionals as well as patients and their families. The play, ‘True Cut’, is based on this research.

David said: “The MEd course at Imperial opened my eyes to different ways of seeing and understanding the worlds of surgery and education. My aim in transforming my research dissertation into the play ‘True Cut’ has been to open up parts of these worlds to wider audiences, both within medicine and in the wider public.”

David drew in an important patient voice by working with Leilani Schweitzer, a mother who lost her son from a clinical mistake and who now acts as a patient liaison and advocate at Stanford University. Listen to Leilani's TEDx talk on Transparency, Compassion and Truth in Medical Errors. The play weaves together Leilani’s testimony and the healthcare professionals’ stories, using verbatim quotes, in a fictional setting based on David’s 30 years’ experience of surgical practice.

It was performed as a rehearsed reading to an audience of local community members and medical professionals in the Studio space at the Bush Theatre, West London. David said: “The rehearsed reading at the Bush Theatre was a great opportunity to start a conversation between members of these groups, exploring different perspectives on the inherent tensions of surgical practice.” 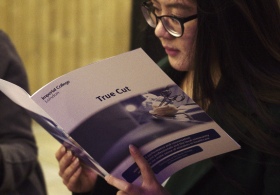 The project to stage the play involved members of the White City community, medical and academic staff from the College, and a team of creatives including professional actors. The core project team included Dr Kirsten Dalrymple (Principal Teaching Fellow in Imperial’s Department of Surgery and Cancer and Co-director of the MEd in Surgical Education), Anna Lawrence-Jones (Patient and Public Involvement and Engagement Manager at the Imperial Patient Safety Translational Research Centre, PSTRC), and two White City community members, Dawn Brown and Kumaran Mutthu. The community members advised the team on how to ensure the event was a success in the community.

Dawn said: “It was a pleasure to be part of this project, and it was a great way for everyone to have a voice. Hopefully the project will lead to lessons for doctors, patients, carers and family members.”

Julia Sandiford, one of the actors in the play, said: “It was quite sobering for me to realise the pressure surgeons are under and how well they cope, but also how they could be given much more support if there was a small shift in the culture.”

A “human and social conversation”

Kirsten Dalrymple, Project Co-lead, said: “By creating time and space for the audience to have a very human and social conversation about important and challenging matters with members from Imperial’s healthcare community I think we helped create an opportunity to appreciate each other’s points of view in more nuanced ways.

“As part of a wider programme of activities, events like this help build and cement trust between Imperial and its new neighbours. That’s what, I think, a university should be about.”