"A worse feeling than any pain I'd felt": Severe pregnancy sickness discussed

Dr Nicola Mitchell-Jones speaks to Caroline Brogan on helping women with hyperemesis gravidarum, and we hear from her former patient Tanya Wood.

Severe pregnancy sickness, or hyperemesis gravidarum (HG), is a debilitating condition that begins in early pregnancy. It is characterised by severe and constant nausea and vomiting, often resulting in dehydration that requires hospital treatment. For this reason, many women with HG will require several hospital admissions during their pregnancy.

It was a worse feeling than any pain I'd ever felt.

Nine in ten women experience sickness in early pregnancy that generally goes away within 14 weeks. One in 100 pregnant women experience HG - extreme sickness that can last for many weeks or months, often triggering lasting physical and psychological problems such as post-traumatic stress disorder.

Treatment involves anti-nausea medication and rehydration therapy via a fluid drip in hospital, and is supportive until symptoms resolve on their own. However, the British charities Pregnancy Sickness Support and the British Pregnancy Advisory Service reported that one in ten women with HG terminate their otherwise wanted pregnancies because of the severity of their symptoms.

Sadly, extreme morning sickness is often overlooked, and women suffer in silence as they feel they are not taken seriously.

Dr Nicola Mitchell-Jones from Chelsea & Westminster NHS Foundation Trust, in collaboration with Professor Tom Bourne at Imperial College London’s Department of Surgery & Cancer, works with HG patients and advocates for improving the services available to sufferers of the condition.

They recently published a paper in BMJ Open that compared inpatient hospital treatment with outpatient care, where women attend daily for rehydration and can be at home between treatments. They found that outpatient care works just as well as inpatient treatment and may suit many women, depending on personal preference. 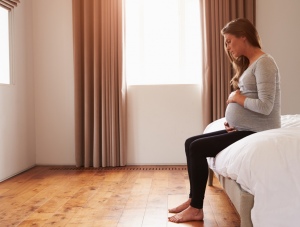 The experts are currently researching the psychological effects of the illness, including the depression and anxiety that can persist after symptoms of HG have resolved, and even after pregnancy is completed.

Dr Mitchell-Jones said: “Sadly, extreme morning sickness is often overlooked, and women suffer in silence as they feel they are not taken seriously. At present we don't have sufficient specialist services available to women suffering with HG.”

Nine in ten women experience sickness in early pregnancy that generally goes away within 14 weeks. Around one in 100 suffer from HG, an extreme form that can last for many weeks or months and trigger lasting physical and psychological problems.