Researchers get their first look at how the toxic protein clusters associated with Parkinson's disease disrupt the membranes of healthy brain cells.

Parkinson’s disease is a degenerative nervous system disorder that affects more than six million people worldwide and causes nearly 120,000 deaths per year. In new research, scientists have characterised the key agents involved in spreading Parkinson’s disease in the brain, and established how they ‘drill’ into the walls of healthy brain cells (neurons).

It is a bit like if you put a piece of extremely hot metal on to a plastic surface.

The research findings, published today in the journal  Science and led by researchers from Imperial College London and the University of Cambridge, will help researchers hoping to find a way to stop these agents from entering and damaging cells, leading to new and more effective treatments for the illness.

The study examined what are known as toxic oligomers – clusters of a protein called alpha synuclein that form when the individual proteins malfunction and start to bind together. The research describes how these agents bore a hole through the neuron walls, eventually causing a series of events that induce neuronal death.

Dr Alfonso De Simone, from the Department of Life Sciences at Imperial, and one of the study’s lead authors, explained: “It is a bit like if you put a piece of extremely hot metal on to a plastic surface. In a fairly short space of time it will burn a hole through the plastic.

“The oligomer does something similar when it comes into contact with the cell membrane, and this disrupts the integrity of the membrane, which is the key step in the mechanisms leading to the death of the neuron.”

Until now, studying how toxic oligomers damage brain cells has been extremely difficult. The oligomers themselves are very unstable; shortly after forming they either work their way into a cell, dissolve, or bind together to form long fibres, from which yet more oligomers can break away and thus worsen the overall spread of toxicity.

In the new study, researchers were able to stabilise oligomers long enough to examine how they damage brain cell walls in unprecedented detail. They identified a specific feature of the oligomer that allows it to latch onto the cell wall, and a ‘structural core’ that then breaks through. 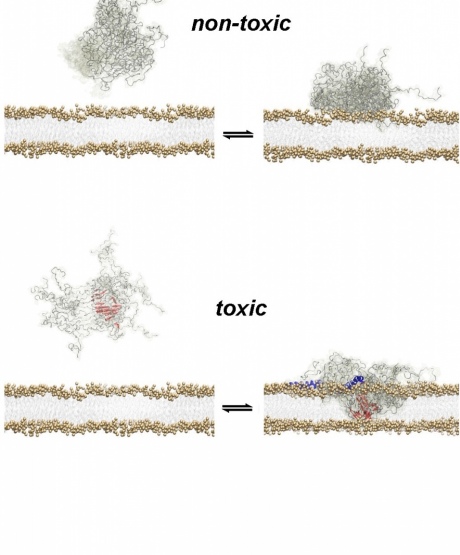 A structural core within a toxic oligomer allows it to ‘drill’ into the wall of a neuron, (bottom). Non-toxic oligomers that lack this feature are less penetrative (top). Illustration by Alfonso De Simone.

Understanding how the oligomers penetrate brain cells will enable scientists to try to develop treatments that can target the part of the structure that does the initial damage. In the study itself, they modified oligomer samples by modifying the protein sequence to make it less adhesive to cell membranes. This reduced the oligomer’s toxicity.

Dr Giuliana Fusco, first author of the study from the University of Cambridge and Imperial, said: “Just having this information doesn’t mean that we can now go and make a drug, but obviously if we can understand why toxic oligomers behave the way they do, we can make faster scientific progress towards treating Parkinson’s disease. It means we can take a more rational approach to drug discovery.”

The researchers examined lab samples of both toxic and non-toxic oligomers using solid state nuclear magnetic resonance spectroscopy (SSNMR). The team characterised different features of the structures, and then studied how these assorted properties influenced their interactions with sample brain cells taken from rats, as well as additional cells taken from human brain tumours.

They found that toxic oligomers seek to attach themselves to the external membranes of brain cells as a sort of survival mechanism, almost in the same way that a virus will search for a host. Unlike a virus, however, instead of using the cell, they gradually kill it as a result of the disruption to the cellular membrane.

The researchers also speculate that the oligomers are able to attach themselves to the cell membrane because they bear similarities to friendly membrane proteins, such as those involved in signalling processes in the brain.

Dr De Simone said: “By an accident of nature, the oligomers have similar features to functional membrane proteins and therefore the same capacity to insert themselves into the cellular membrane.”

‘Structural basis of membrane disruption and cellular toxicity by a-synuclein oligomers’ by G Fusco et al. is published in Science.