The world's rainforests take up extra carbon dioxide in the atmosphere, but their ability to do so is threatened by drought and fragmentation.

Human activities pump extra carbon dioxide into the atmosphere, but only around half of it stays there. The oceans and forests of the world are known to be carbon ‘sinks’, absorbing much of the excess atmospheric carbon.

However, it was not known exactly how much carbon different forests absorb, and what could affect this capability. Now, an international team of researchers has completed a study of the carbon-absorbing capability of the intact tropical rainforests of Borneo.

We must aim to preserve larger areas of continuous forest, and protect against further fragmentation, in order to maintain its ability to uptake carbon emitted by human activity.

The team monitored tens of thousands of trees in over a dozen locations across Borneo, for up to half a century, showing that these forests increased the amount of carbon they stored (their ‘carbon stock’) by 430 kg per hectare per year.

However, they also found that the carbon sink can be ‘switched off’ by drought and that the edges of forests, which are increasing due to human activity, can actually be sources of carbon. The results are published today in the journal Nature Communications.

Lead author Dr Lan Qie, who conducted the research at the University of Leeds and is now based in the Department of Life Sciences at Imperial, said: “Borneo’s remaining rainforests are increasing in size, adding to their already high carbon stocks.

“The average increase we saw in Borneo is equivalent to adding 700 household Christmas trees to each 100 metre by 100 metre forest plot, each year. There is of course both growth and death in these towering and dynamic tropical forests, but on the whole they are absorbing more carbon year after year, storing it as wood.”

The new results are consistent with increases shown across tropical Africa and Amazonian forests in the past, completing scientists’ picture of tropical rainforest carbon sinks.

Co-author Professor Simon Lewis, from the University of Leeds, said: “After conducting dozens of field campaigns across the tropics over the past two decades, we can now finally say that the world’s remaining intact tropical forests, across the Amazon, Africa and Asia, are all acting as carbon sinks – absorbing more carbon than they are releasing.

“It is now clear that undisturbed tropical rainforests across the world are all providing an important service to humanity in removing carbon from the atmosphere, adding a further reason to protect these vulnerable forests.” 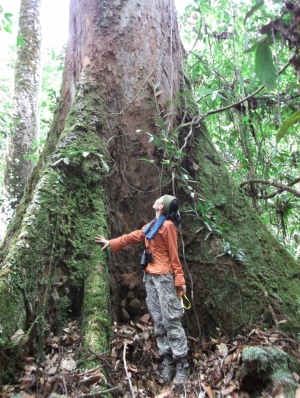 Dr Qie in the forest

The new study also reports on two threats to continued carbon uptake by Bornean forests: droughts and the influence of nearby cleared areas of land.

Droughts kill trees, with climate models suggesting more severe droughts in the future. The monitored forests suffered an extreme drought in 1997-98, which killed many trees, returning carbon to the atmosphere.

This temporarily ‘switched off’ the carbon uptake by the forest. If droughts appear more regularly, or more strongly, this would reduce what the scientists call the ‘intact tropical forest carbon sink’ in the future.

The study also investigated the highly fragmented nature of the remaining forest in Borneo. Monitored forests near burnt areas, oil palm plantations, and farmers’ fields behaved differently to those far into the interior of the forest.

Near forest edges, trees were more likely to die, and the tree species that replaced them tended to be those that store less carbon. 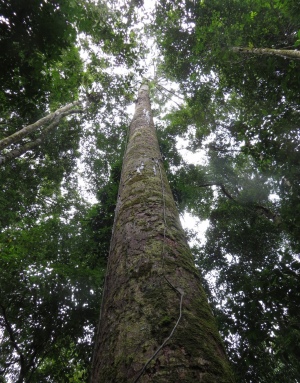 Dr Qie said: “Our calculations indicate a minimum size that a patch of forest must be in order for it to be a carbon sink - where its interior is absorbing enough carbon to outweigh its edges, which may be losing carbon. A forest reserve of 300 hectares, or one square mile, is just about big enough.

“We must aim to preserve larger areas of continuous forest, and protect against further fragmentation, in order to maintain its ability to uptake carbon emitted by human activity.

The researchers did note, however, that with management to reduce the carbon loss along forest edges, very small forest fragments can still contribute to carbon uptake from the atmosphere. Dr Qie added: “Existing forest fragments of any size are important, for both carbon and biodiversity conservation.”

The team now hope that this network of long-term observations of Asia’s tropical forests can be continued for another 50 years, as they provide essential baseline information on how these globally important ecosystems are responding to rapid global environmental change. Global biodiversity conservation does save species, but could be done smarter Nine things we have learned from one of ecology's largest field experiments Fragmented forests create animal winners and losers