Q&A with Al Gore: the climate crisis, its solutions and pushing for change "I believe we will solve the climate crisis, but we must act with greater urgency," says former United States Vice-President at Imperial lecture.

Al Gore, who featured in An Inconvenient Sequel: Truth to Power, was speaking at Imperial College London for the sold-out 2017 Grantham Annual Lecture "The climate crisis and its solutions". The event was part of a programme of events designed to celebrate the tenth anniversary year of The Grantham Institute - Climate Change and the Environment.

Watch the first five minutes of the lecture:

Ahead of the lecture, Mr Gore answered some questions about the climate crisis and its solutions:

America is now the only country that has not signed up to the Paris Agreement. However, the sum effect of all the other countries’ climate change plans may not avert the worst of climate change. How does this situation make you feel?

I believe that we will solve the climate crisis, but we must act with greater urgency.

The United States will meet, and probably exceed, its commitments under the Paris Agreement, regardless of the President’s views.

There’s important progress happening across the world. India recently announced that, within 13 years, 100 per cent of all their new cars and trucks must be electric vehicles.

The Paris Agreement is an important and historic breakthrough designed to maintain and accelerate progress tackling the climate crisis. As for President Trump’s declaration that the US will withdraw from the Agreement – the first day the US can legally withdraw is the day after the next Presidential election in 2020. And a new President would only need to give 30 days’ notice to re-enter the agreement.

Moreover, immediately after the President’s speech, many of the largest US states, hundreds of cities and thousands of businesses announced that they are “still in” the Paris Agreement. Their commitments, along with continuing cost reductions for renewable energy, have convinced most analysts that the US will meet, and probably exceed, its commitments under the Paris Agreement, regardless of the President’s views.

What would you say to President Trump if you saw him right now?

First, I would urge him to resign. 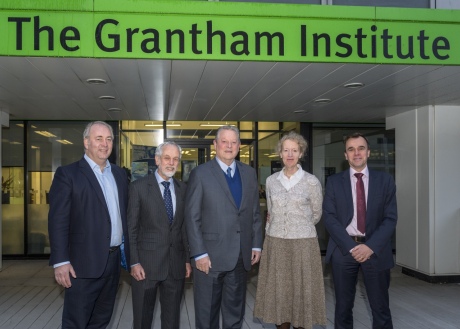 There is a suggestion that people get ‘climate change fatigue’ from hearing the same message. How do you keep up the momentum and motivate people to keep pushing for a change?

You’ve got to make it relevant to people. And Mother Nature has recently become a very persuasive participant in the debate about the climate crisis – climate-related extreme weather events are shaking up an increasing number of people who are experiencing them on a more personal level.

Focus on solutions and realistic hope. There are some compelling solutions in clean energy that are changing the narrative in a powerful way. The cost of renewable electricity from solar and wind has come down so quickly that it is now below the cost of electricity from burning fossil fuels in many geographies, and is less than half that cost in a growing number of regions. Moreover, these cost reductions are continuing month by month, unabated. Significantly, the same is now true for batteries and other forms of energy storage.

What success have you had in reaching people who are not usually pro climate-action?

I’ve found that different people may have different motivations for solving the climate crisis.

Take, for example, the mayor of Georgetown, Texas, who appeared in my recent movie, An Inconvenient Sequel: Truth to Power. The mayor is a conservative Republican for one of the most conservative Republican cities in the country, and he has chosen to convert the town to 100 per cent renewable electricity because it makes sense economically. He is trying to save money for his ratepayers, and it just so happens that saving the future of humanity is a nice side benefit.

We’re seeing people who don’t even want to use the phrases ‘global warming’, ‘climate change’, or ‘climate crisis’ saying, “you mean I can save money and, as a side effect, we don’t have the pollution? Okay, I’m in!”

Take a look at a selection of comments on Twitter: