Winner of the 2017 Student Challenges Competition Kitty Liao out in the field testing their innovative vaccine cooling system.

As the IGHI Student Challenges Competition opens for entries, we take a look at the previous winners and where they are now.

From a diagnostic tool to detect a silent cancer to an innovative way to store vaccines in developing countries, Imperial has provided a platform for UK students to showcase their ideas and improve global health.

Since the inception of the Institute of Global Health Innovation’s (IGHI) annual Student Challenges Competition in 2012, we have received numerous applications and out of these applications, almost 30 finalists have pitched their ideas to win prize money of up to £5,000 to help make their idea a reality.

The 2018 competition which opened last week is accepting entries until 8th February and is open to all UK registered university students.  Find out more and apply online.

In this article, we take a look at the top five innovations from the competition over the years:

A new way to store and cool vaccines during the last mile of their journey to the clinic claimed the £5,000 in the 2016/17 competition.

The University of Cambridge’s Kitty Liao and Imperial College London’s Abellona U claimed the first prize which went towards their start-up company ‘Ideabatic’.  Their life-saving vaccine cooling and delivery system ‘SMILE’ aims to deliver vaccines to the 19 million unvaccinated children living in the most remote areas of the world.

According to the World Health Organisation, every year, two to three million children die of vaccine-preventable diseases and in 2016, there were 19.4 million children who are unable to receive basic vaccinations. One of the main contributing factors to these figures is that the cool boxes currently used for delivering vaccines to the most remote regions, termed ‘the last-mile journey’, are inadequate. A typical last-mile journey takes between two to seven days. However, the cool boxes currently used can only maintain vaccines to be within the required temperature range of two to eight degrees Celsius for up to 14 hours. As a result, 20 to 50 percent of the vaccines are spoiled during the last-mile journey, which amounts to an annual total of 600 million dollars’ worth of vaccines being wasted globally.  Ideabatic is developing SMILE, a smart last-mile vaccine delivery system to address this issue.

The prize from the competition has been very helpful for us to secure our UK patent.

– Kitty Liao and Abellona U

“So much has happened since we won the Student Challenges Competition last year” says winner Kitty Liao. “The prize from the competition has been very helpful for us to secure our UK patent. Following that, we have recently submitted our global patent”.

Read more about the progress of Ideabatic in their recent blog article. 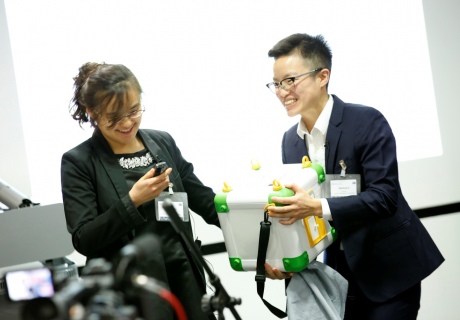 A new way to test for tuberculosis claimed the top prize in the 2015/16 Competition.

TB is now the joint leading cause of death worldwide due to an infectious disease, alongside HIV. Despite the need for early accurate testing to treat the disease and prevent new infections there is not a current test that is quick, easy to use and affordable. Harriet’s proposal used nanomaterials to detect unique genetic barcodes for TB in the blood, which would enable earlier treatment and prevent further transmission.

The competition has helped me to think about how my work will fit into a real world context.

“Winning was an amazing feeling and I am so glad I applied” said Harriet. “The competition has helped me to think about how my work will fit into a real world context and the prize money has helped me develop a prototype for my TB diagnostics test, which I hope will lead to transforming TB diagnostics worldwide”. 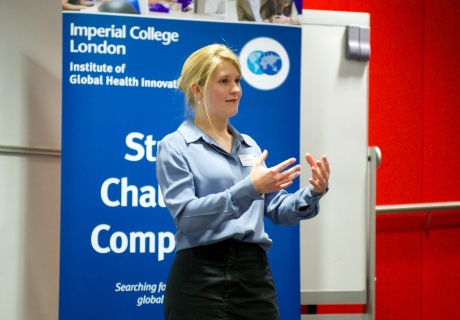 Harriet presenting to the Dragons. 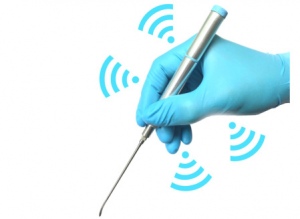 The instrument vibrates when too much pressure is applied.

Imperial PhD students Christopher Payne and Hani Marcus impressed the Dragons the most in the 2014/15 competition. Their inspiring and inventive idea was for a smart handheld instrument for microsurgery that alerts neurosurgeons if they are at risk of damaging tissue they are handling. We all make mistakes, whether it’s a typo, a miscommunication or a glitch, but for neurosurgeons, the impact of a mistake can lead to a life or death situation. Christopher and Hani’s device works by indicating to surgeons, via vibrotactile feedback, when a force threshold has been exceeded, allowing the surgeon to adjust the amount of pressure they are exerting to avoid damaging the tissue. Many existing haptic-feedback systems, particularly master-slave robotic platforms, are large, extremely complex, and costly. However, their approach is small, simple, and inexpensive, so it can be scaled up quite easily.

The prize money was a huge help in enabling us to take the project forwards.

Winners of the 2015 competition

“We were absolutely delighted to have won the IGHI Student Challenges Competition” said Christopher and Hani. “We were both very grateful to have had the opportunity to showcase our work; the prize money was a huge help in enabling us to take the project forwards”. Find out more about how their project has progressed in their blog article here. 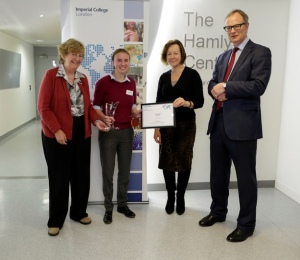 Gabrielle with the Dragons

Imperial medical student Gabrielle Prager scooped the £5,000 prize money for her work on improving the diagnosis of schistosomiasis, a neglected tropical disease.

Gabrielle’s project focused on a new diagnostic technique for schistosomiasis, a disease caused by parasitic flatworms which leads to chronic infection and affects over 200 million people worldwide. Schistosomiasis control through mass treatment using the medication praziquantel is progressing rapidly.  However, current diagnostic methods based on detecting the worms’ eggs by microscopy have limited sensitivity, being particularly unreliable at low infection intensities.  More sensitive diagnostics are desperately needed, explained Gabrielle, for both the identification of communities in need of drug treatment and the monitoring of treatment success.

The prize money has helped me ascertain whether a new technique to detect the parasite’s DNA might offer increased sensitivity, resulting in more accurate diagnosis.

“We all hope to be able to recognise the moment when what we have learned becomes what we do - to turn theory into practice.  IGHI’s Student Challenges Competition is a platform that allowed me to consider what we saw as a need in terms of a solution. It encouraged me to apply the scientific work I was doing in a pragmatic and constructive way”. 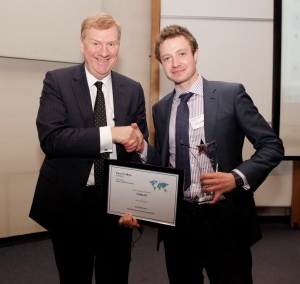 John Chetwood, a fifth year medical student at the College, was awarded the 2012 prize.

The winning project used urinary biomarkers to create a new diagnostic tool to detect Cholangiocarcinoma, an aggressive form of cancer that affects the bile ducts, and is caused by the parasitic worm liver-fluke. John used NMR spectroscopy to identify liver cancer in Thai patients and to distinguish between healthy controls and infected populations.

To find out more about the Student Challenges Competition, visit the website.