Professor Ben Feringa told a packed crowd to ask questions in science, but remember to "enjoy the beauty of nature" at the 30th Schrodinger Lecture.

Professor Feringa, from the University of Groningen in the Netherlands, used the example of his work building molecular machines to share the joy of pure discovery, telling students in the audience to “ask questions your professor has never asked before.”

Professor Feringa’s work, which earned him a share of the Nobel Prize in Chemistry in 2016, focuses on imitating natural molecular machines – nanoscopic structures that move.

He said that while we have been good at making synthetic versions of natural materials, we have had limited success replicating the complex tiny machines that carry out many vital functions in our bodies and beyond.

However, the scope for these molecular machines is huge – they could be used for example for targeted therapies and drug delivery, self-repairing materials or even nanorobots that could detect and treat diseases in the body.

While these breakthroughs may be a little way off yet, Professor Feringa described some of the remarkable progress he and his team have made already.

The team started simple with a switch that copies the way molecules in the eye react to light. When combined with another synthetic molecular machine the team developed – a hole that can be opened and closed when triggered by light – this could be used to deliver targeted treatments. 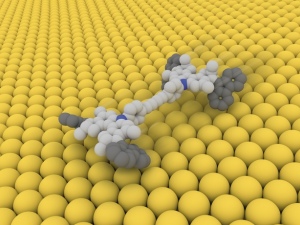 A drug could enter the body, but be completely inert until a light is shone on it at the exact point in the body it is needed. This technology could be used for example to deliver cancer drugs to specific areas of the body to reduce the side effects of the treatment.

It could also be used in self-healing materials – for example if a material cracked so that light or air reached the interior, this could make tiny capsules open and deploy new material to plug the gap.

Professor Feringa also demonstrated progress building molecular motors that can rotate on command, or move autonomously. The team has even built a ‘nanocar’ – a tiny four-‘wheeled’ machine that can move along a track – and a ‘nanosubmarine’ that can propel itself through conditions similar to those found in the body (although its movement can’t be directed yet).

These sorts of advances could pave the wave for nanorobots in the body, or surfaces that will respond to external influences – like light – and be able to detect and sense small changes. While he admits this reality may be 40-50 years away, Professor Feringa said that we have “made the first steps” – and that is the most important part.

Professor Feringa also got to meet Imperial’s current recipients of the College’s Schrodinger scholarship, which offers funding to outstanding PhD students in the Faculty of Natural Sciences, and joined guests and researchers at an event showcasing the latest science after his lecture.