Bioengineers at Imperial have measured how the force of babies' kicks in the womb change over the course of pregnancy.

During pregnancy, a foetus typically starts to move its head and neck at ten weeks, and expectant mothers begin to feel movements like kicking between 16 and 18 weeks.

These movements have similar benefits to exercise in adults, as the kicking and wriggling strengthens bones and muscles. However, until recently, scientists hadn’t quantified the forces involved, or their effects on bone and muscle development in the womb.

To fill the blanks, Dr Niamh Nowlan and co-author Dr Stefaan Verbruggen at Imperial College London and colleagues measured the forces produced by foetal kicking from 20 to 35 weeks of pregnancy. 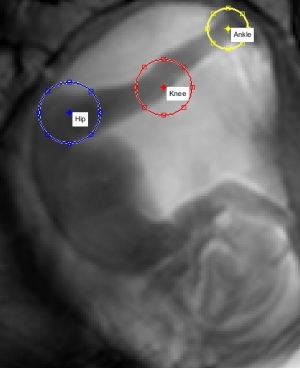 They analysed moving images from previous non-invasive studies on pregnant women. The moving images were made using ‘cine -magnetic resonance imaging (MRI) – a technique that shows multiple single images over time to create a video.

Using the cine-MRI technique they tracked the movements of the hip, knee and ankle joints during kicking. The team then built computer simulations of the movements relative to these joints. From this they calculated how strong the kicks were, and the effect of these kicks on the foetal skeleton.

The researchers recorded the images and calculations at 20, 25, 30, and 35 weeks. From 20 to 30 weeks, foetal kick strength nearly doubled from 6.5 to 10.5 pounds of force, but between weeks 30 and 35, the strength dropped to around 3.8 pounds. However, the stresses and strains on the skeleton increased steadily between 20 and 35 weeks, despite the lack of strength later on.

The authors say the increasing strength shown by the foetus puts stress and strain on the skeleton, which helps the bones develop. As the foetus continues to grow, it has less room to move, but the kicks meet more resistance from the surrounding womb, which also contributes to these stresses. 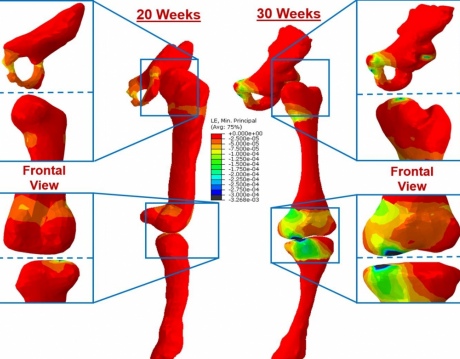 Their data could help shape diagnosis and treatment of conditions which affect skeletal development in the womb, particularly conditions in which reduced movements play a role.

Dr Nowlan, from Imperial’s Department of Bioengineering, said: “The patterns we have found emphasise the links between movement in the uterus and bone development. Our findings highlight a crucial missing link in understanding the role of mechanical forces in prenatal bone development.”

The results were published in the Journal of the Royal Society Interface and funded by Arthritis Research UK.

“Stresses and strains on the human fetal skeleton during development” by Verbruggen SW et al on 24 January 2018 in Journal of the Royal Society Interface.