The John Fulcher Molecular Neuro-Oncology Lab has established itself as an international centre of excellence for brain tumour research.

Imperial College London’s John Fulcher Molecular Neuro-Oncology Laboratory recently marked its tenth anniversary. The lab was set up in 2009 at Hammersmith Campus as a result of funding from the Brain Tumour Research Campaign (BTRC), marking a key milestone in the history of the charity which aims to raise public awareness of the need for brain tumour research. 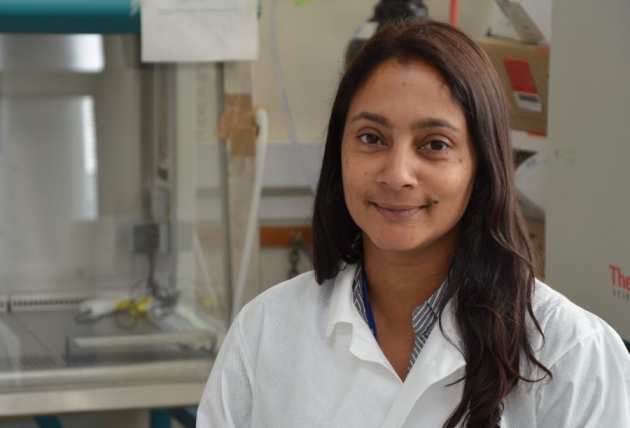 Dr Nelofer Syed, who set up the lab, leads a translational research programme in brain tumours with a particular focus on identifying abnormal metabolic pathways that may drive cancer cells, in the hope of finding new targets for future therapeutic strategies.

On marking the anniversary, Dr Syed, a senior research fellow, said: “It’s so exciting to celebrate the launch ten years ago and look back on our achievements. In the beginning, it was just me and some very basic facilities but now we are a team of four post-doctoral scientists, three PhD students and a lab manager.

"Over the past ten years, we've had four students successfully defend their PhDs and hosted a large number of BSc and MSc students. Moreover, our lab is now well equipped and we have a bank of tissue on which we can do translational research.”

From lab to clinic

“We have such a unique link with the clinical team at Charing Cross that results in our research directly benefiting patients. Most scientists don't have this translational link and that is what drew me to this rewarding post,” said Dr Syed. Kevin O’Neill, a consultant neurosurgeon at Charing Cross (Imperial College Healthcare NHS Trust), leads the BTRC clinical team: “In the early 2000s we had a great clinical set-up, a desire to make a difference, patients who were doing well in terms of outcomes and a lot of clinical material for analysis, but we needed a lab.

“So this event is a seminal moment, a big development in brain tumour research at Imperial as well as an important part of what’s been going on around the country helped by Brain Tumour Research’s national campaign to help focus funding bodies on this problem.”

Since the lab’s inception, the brain tumour research landscape has rapidly changed with more investment in research, including last year’s announcement that the Government plans to double its investment with a £40 million 'Dame Tessa Jowell Brain Cancer Research Mission’.

Kevin O’Neill said: “Ten years ago there was real frustration at the lack of available treatments, all we could then offer was radiotherapy and surgery. Wendy [Fulcher] wanted to make a difference and I agreed with her to see what we could do. The brain tumour landscape has changed for the better and the John Fulcher Molecular Neuro-Oncology laboratory has been at the very heart of that transformation.”

The research lab is named in memory of John Fulcher who was diagnosed with an inoperable glioblastoma brain tumour. John underwent several surgeries at Charing Cross under the care of Kevin O’Neill, but unfortunately died ten months later in 2001. On marking the milestone, Wendy said: “Our whole vision from the outset was to create a pipeline from lab to clinic, not just research for research’s sake but research that impacted directly on the patients, in effect research that was completely patient-centric. We have created a unique partnership in that there is such a close relationship between lab and clinic.”

This article was adapted from a press release by The Brain Tumour Research Campaign.

- 16,000 people each year are diagnosed with a primary or secondary brain tumour