A team from Imperial College London has been awarded £25 million funding from the UK Government to continue its fight against neglected tropical diseases, it was announced this week. The money will enable the Schistosomiasis Control Initiative (SCI) to provide 75 million treatments to protect some of the world’s poorest children against schistosomiasis – an illness caused by parasitic worms – and soil-transmitted helminths (STH).  £15 million of the funding will be spent directly on procuring drug treatments, through an organisation called Crown Agents. The rest will be administered by SCI.

More than 200 million people are infected with schistosomiasis worldwide, and many more are at risk due to poor hygiene and lack of safe water. In children, it can cause anaemia, stunted growth, and impaired learning ability. If left untreated, the symptoms escalate in adulthood and can result in liver disease and bladder cancer. An estimated 280,000 deaths every year in developing countries are attributable to schistosomiasis.

For the last 20 years, the drug praziquantel has been used to control schistosomiasis in countries around the world. Praziquantel greatly reduces the risk of severe disease, but despite its low cost, it is estimated that less than 10 per cent of people requiring treatment are currently being reached.

The SCI has been tackling schistosomiasis and other neglected tropical diseases since 2002, when it was established with a grant from the Bill and Melinda Gates Foundation. Through 2007, the SCI had facilitated the delivery of over 40 million treatments using that funding, but since then over 20 million more treatments have been delivered each year against NTDs using additional funding from USAID, Geneva Global (in Rwanda and Burundi) and from the Gates Foundation.

The new award, from the UK Department for International Development, will provide £25 million for the SCI to use in Africa over the next five years. The money will pay for praziquantel treatment to be delivered to children, high risk individuals and pregnant women in several countries in sub-Saharan Africa. In particular, the SCI aims to eliminate the serious consequences of schistosomiasis from Niger and Uganda within five years. The treatment programme will also expand towards national coverage in Tanzania and Zambia, and programmes will begin in four new countries.

SCI will be assisted in their drug delivery by the Centre for Neglected Tropical Diseases at Liverpool School of Tropical Medicine via a sub contract through LATH (Liverpool Associates in Tropical Health). In six countries, this will lead to treatment for lymphatic filariasis – another worm disease – becoming integrated with schistosomiasis and STH treatment. 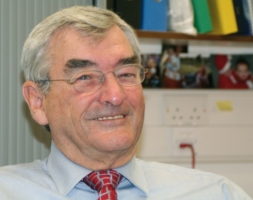 “For less than 50p per child per year we can deliver treatments that will put a stop to these diseases, which affect most developing countries,” said Professor Alan Fenwick OBE, Director of the SCI in the Department of Infectious Disease Epidemiology at Imperial College London. “This represents excellent value for public investment in health.”

In line with the government‘s push to make aid deliver better results, the SCI will safeguard the distribution of drugs and make sure they reach those most in need by providing aid only once agreed milestones have been met . Staff will be trained in the recipient countries to work within high risk communities.

The UK’s International Development Secretary, Andrew Mitchell, said that treating schistosomiasis and intestinal worms would improve school attendance in high risk countries by up to 25 per cent.

“Education is one of the best routes out of poverty, yet millions of children are unable to fully benefit from attending school because they are weakened by these diseases,” he said. “British aid will provide up to 75 million lifesaving treatments, ensuring that ill health doesn't stop millions of the most vulnerable children getting a basic education and breaking the cycle of extreme poverty.”

The US government recently committed additional funding to neglected tropical diseases including intestinal worms and schistosomiasis. The SCI, CNTD and USAID will integrate treatment programmes across the targeted countries to avoid duplication and ensure that funds are streamlined.

In addition, the SCI will work in conjunction with the World Health Organisation (WHO) to help recipient countries prepare national plans for the sustainable control of all neglected diseases. They will work with ministries of health and national partners to train staff to distribute drugs in communities that need them the most.