Wealth of orchid varieties is down to busy bees and helpful fungi, says study

Orchids form intimate relationships with insect pollinators and underground fungi, which help them thrive and broaden their varieties - News release

Scientists have discovered why orchids are one of the most successful groups of flowering plants - it is all down to their relationships with the bees that pollinate them and the fungi that nourish them. The study, published tomorrow in The American Naturalist, is the culmination of a ten-year research project in South Africa involving researchers from Imperial College London, the Royal Botanic Gardens, Kew, and other international institutions.

The orchid family is one of the largest groups of flowering plants, with over 22,000 species worldwide. Today's research suggests that there is such a huge range of species because orchids are highly adaptable and individual species can interact with  bees, and other pollinators, in different ways.

The study also shows how orchids are able to live harmoniously together, with different species working in partnership with different microscopic fungi in the soil, ensuring they do not compete with each other.

Prior to today's study, it was known that orchids have strong interactions with bees, which pollinate the flowers in return for food such as nectar or oils, and also with fungi, which supply minerals to the roots in return for sugars. These relationships are amongst the best examples of nature's system of 'mutual benefit' and are believed to have been important for enabling orchids to evolve into so many different species. However, the mechanisms by which these relationships affect the number of plant species, and these species' ability to coexist, had remained obscure.

Professor Tim Barraclough, from the Division of Biology at Imperial College London, co-led an international team of plant scientists to investigate how these interactions affect orchid diversity.  "Orchids are hyper-diverse globally, particularly in South Africa, where they have diversified to a large extent, so we wanted to find out how lots of species are able to exist without competition," he said. 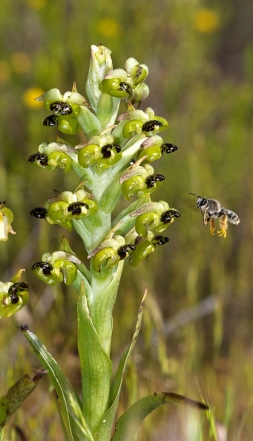 The group studied 52 orchid species in a small region of South Africa, which all secrete oil inside their flowers that female bees collect to feed to their larvae. In order to investigate which pollinating bees were visiting the different species, they collected orchid pollen from the bees for DNA sequencing and analysis. They found strong evidence that when an orchid moved to a new geographical area it adapted to a different pollinating bee species, and interestingly, some competing orchid species were able to adapt by placing pollen on different body parts of the same bee.

"What is remarkable in these orchids is that diversity is generated not only through switches between bees, but also by switches between different body parts of the same bee, so two closely related orchids might place pollen on different segments of one bee's front leg," added Professor Barraclough. "It's given us a fundamental insight into how so many new species can originate, and once they originate how they are able to coexist without exchanging genes."

The researchers also studied the microscopic fungi living on the roots of the orchid, to see how this relationship was affecting plant diversity. Most flowering plants host microscopic fungi in their roots that help the plant take up nutrients from the soil. Until now it has been difficult to investigate this interaction, as most of the fungi belong to species that are difficult to culture. The researchers overcame this challenge by combining a molecular technique known as DNA barcoding with field experiments. In contrast to the bees, where co-occurring orchid species normally share the same insect pollinator, the plants needed to use different fungal partners in order to coexist in the same region.

"By tapping into different kinds of fungi, different plant species access different pools of nutrients and so the problem of living together without competing for the same resources is solved," said Professor Barraclough. However, the same fungal partners are found in different geographical areas and so orchid species that originate in different areas, by adapting to different pollinators, tend still to use the same fungi.

The team's fieldwork shows that shifts in pollination traits were important for bringing about new species and allowing coexistence in a diverse group of orchids, whereas shifts in fungal partner were important for coexistence but not for speciation. Many other groups of flowering plants enter into similar relationships with pollinators and fungi, and both the origins and the future survival of that diversity could depend critically on understanding these relationships.

Dr Richard Waterman, now at the University of Sheffield, who conducted the research as part of his PhD at Imperial College London and the Royal Botanic Gar dens, Kew, commented on the next steps for the scientists: "We need a better understanding of these relationships if we are to predict and counter the effects of the worldwide decline in pollinators and soil quality."

(3) The oil-collecting bee Rediviva longimanus delves deep into the orchid Pterygodium schelpei to extract oil with absorbent hairs on its elongated front feet.(Copyright A Pauw)
https://fileexchange.imperial.ac.uk/files/8347b80778/Fig%203%20(Copyright%20A%20Pauw).jpg

3. The Royal Botanic Gardens, Kew is a world famous scientific organisation, internationally respected for its outstanding living collection of plants and world-class Herbarium and Laboratory as well as its scientific expertise in plant diversity, conservation and sustainable development in the UK and around the world. Kew Gardens is a major international visitor attraction. Its landscaped 132 hectares and RBG Kew's country estate, Wakehurst Place, attract nearly 2 million visitors every year. Kew was made a UNESCO World Heritage Site in July 2003 and celebrated its 250th anniversary in 2009. Wakehurst Place is home to Kew's Millennium Seed Bank, the largest wild plant seed bank in the world. RBG Kew and its partners have collected and conserved seed from 10% of the world's wild flowering plant species (c.30, 000 species) and aim to conserve 25% by 2020. http://www.kew.org