A giant-scale experiment on deforestation, biodiversity and carbon cycling has got underway in the spectacular forests of Sabah, a Malaysian state on the tropical southeast Asian island of Borneo. Scientists hope the results will help guide the management and conservation of remaining rainforests in tropical Asia.

One of the largest ecological studies in the world, encompassing 8000 hectares (an area larger than Manhattan), the Stability of Altered Forest Ecosystems (SAFE) Project is led by researchers at Imperial College London and was officially launched this week by the Prime Minister of Malaysia.

Over the next ten years, scientists from Malaysia and the UK will be studying how deforestation and forest fragmentation alter the ability of this tropical landscape to support a unique diversity of life. They will also be investigating the impact of agricultural development on the ecosystem's ability to absorb carbon dioxide, an important greenhouse gas. This is the first time an experiment of this magnitude, nature and influence has been attempted, more than doubling the size of previous experiments conducted over the last 30 years.

The SAFE Project involves distinguished researchers from Imperial, the University of Cambridge and the University of Oxford. It is supported by the UK Royal Society’s South East Asia Rainforest Research Programme (SEARRP) and a generous donation of 30 million Malaysian ringgit (about £6.1 million) from the Sime Darby Foundation in Malaysia.

Project leader, Dr Robert Ewers, from the Department of Life Sciences at Imperial College London said: "The potential impact of the SAFE Project is global and far-reaching. The findings of this study will help scientists to design landscapes that maintain agricultural production at least cost to biodiversity."

In an area that has been gazetted for conversion to plantation for the last 20 years, the scientists will take advantage of a planned and government-approved oil palm conversion to make experimental changes to the forest, among the world's most biodiverse tropical ecosystems, to create a fragmented forest that closely resembles recently developed land. 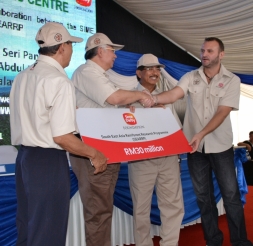 Professor Andrew Balmford from the Department of Zoology at the University of Cambridge said: "The end goal we are aiming for is to understand how a tropical rainforest functions, and how that functioning changes when you place the forest under pressure from humans. We can get answers to these questions by controlling how exactly the forest is disturbed, under experimental conditions. Careful observation of how the ecosystem becomes disrupted when it is damaged will tell us a tremendous amount about how it functions when it is left alone."

The SAFE Project consists of four interconnected projects. The first of these will scrutinise differences in ecosystem function and species' persistence in the forest as it is incrementally damaged by light and heavy logging, becomes fragmented, and is eventually converted into an oil palm plantation.

The second will investigate how managed deforestation, which often leaves isolated fragments of forest of different sizes and in different locations within a plantation, can be designed to minimise the ecological damage caused by converting forests to agriculture.

A third is focussed on the role of forest fragments in protecting water supplies and biodiversity in the streams that pass through forests and plantations.

And the fourth project will quantify how the carbon cycle of the forest changes as it is converted and fragmented, and how the resilience of this carbon cycle to climate change can be maximised.

Professor Yadvinder Malhi, Director of the Centre for Tropical Forests at the University of Oxford said: "The concept of a 'natural ecosystem' is fast disappearing in many regions of the tropics as humans modify the world at an ever-accelerating rate, meaning much of the forest biodiversity and ecosystem services must now persist and be protected in human-modified landscapes. The SAFE Project is conducting one of the world's largest ecological experiments to understand the myriad ways in which logging, deforestation and forest fragmentation cause release of greenhouse gases, and modify the functioning and climate sensitivity of remaining tropical rainforest. How can we maximise the carbon retention and climate benefits of remaining tropical forests in a human-modified landscape, benefits we urgently need to maintain in our struggle to avoid dangero us climate change?"

The launch was notably attended by the Sabah Chief Minister; Sabah Minister for Science, Tourism and the Environment; Director of the Royal Society SEARRP, Dr Glen Reynolds and the Chairman of Sime Darby, Tun Musa Hitam.

In his speech, Tun Musa said: "The oil palm industry has contributed tremendously to poverty eradication in this part of the world. However, while we in the far east can attest to the virtues of the oil palm, it is also an irrefutable fact th at the unfettered expansion of oil palm plantations can have a negative impact on the environment. And this is where SAFE comes in [...] We need to understand our environment better and the impact of agriculture on the ecosystem. We need to understand how best to produce food, the world’s most basic need, and do it without 'compromising the ability of future generations to meet their own needs.' As a company, Sime Darby must be sustainable in every way. This means we need to deliver profits and show growth but we must do so responsibly. The safe project will help us to understand how best to achieve this."

1. About the SAFE Project

Since its foundation in 1907, Imperial's contributions to society have included the discovery of penicillin, the development of holography and the foundations of fibre optics . This commitment to the application of research for the benefit of a all continues today, with current focuses including interdisciplinary collaborations to improve global health, tackle climate change, develop sustainable sources of energy and address security challenges.