Scientists have discovered a protein secreted by tuberculosis (TB) bacteria that could be a promising new vaccine candidate.

Scientists have discovered a protein secreted by tuberculosis (TB) bacteria that could be a promising new vaccine candidate, they report today in Proceedings of the National Academy of Sciences. The protein could also be used to improve diagnosis of TB.

TB is caused by the bacterium Mycobacterium tuberculosis (MTB), which infects the lungs and spreads through the air as a result of coughing. There are 9 million new cases of TB each year, killing 4,700 people a day worldwide.

BCG is the only available vaccine but it is of limited effectiveness in protecting against TB. BCG derives from the Mycobacterium bovis bacterium, which infects cattle and is closely related to MTB.

Vaccines work by stimulating the immune system to retain a memory of particular molecules from a microbe that will trigger a rapid immune response if the microbe is encountered later. The best candidates for vaccines are those that trigger the strongest response from the immune system.

In the new study, scientists identified a protein, called EspC, that triggers a stronger immune response in people infected with the TB bacterium than any other known molecule. This protein is secreted by the TB bacterium but not by the BCG vaccine. As a result, the BCG vaccine does not induce an immune response to this protein, so deploying it as a new TB vaccine would provide additive immunity over and above that provided by BCG.

The new protein could thus underpin the next-generation of immune cell-based blood tests for TB infection, known as interferon- gamma release assays (IGRAs). The researchers believe it could provide increased diagnostic sensitivity without compromising a test’s ability to discriminate between BCG-vaccination and TB infection. 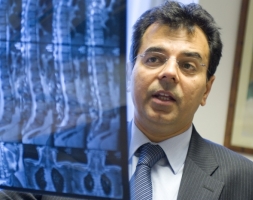 “Despite most of the world’s population having had a BCG vaccination, there are still 9 million new cases of TB every year,” said senior author Professor Ajit Lalvani, from the National Heart and Lung Institute at Imperial College London. “So we urgently need to develop a more effective vaccine for TB.

“We’ve shown that EspC, which is secreted by the bacterium, provokes a very strong immune response, and is also highly specific to MTB. This makes it an extremely promising candidate for a new TB vaccine that could stimulate broader and stronger immunity than BCG. Surprisingly, our results also show that this molecule could underpin next-generation diagnostic blood tests that can rapidly detect latent TB infection.”

In the study published today, which was funded by the Wellcome Trust, Professor Lalvani and his colleagues looked at how the immune system responded to EspC in 45 people with active TB, 27 people with latent TB infection, and 27 uninfected BCG-vaccinated controls. They found that EspC elicited immune responses at least as strongly as other proteins known to be targeted by the immune system in people with active and latent TB infection. Only two out of 27 BCG-vaccinated controls responded to the antigen, demonstrating the specificity of the response. Further experiments revealed that this is because the TB vaccine lacks genes that are needed to secrete EspC.

3. The Wellcome Trust is a global charitable foundati on dedicated to achieving extraordinary improvements in human and animal health. It supports the brightest minds in biomedical research and the medical humanities. The Trust’s breadth of suppo rt includes public engagement, education and the application of research to improve health. It is independent of both political and commercial interests.
www.wellcome.ac.uk