From candy floss to rock: study provides new evidence about beginnings of the Solar System

The earliest rocks in our Solar System were more like candy floss than the hard rock that we know today, according to research published in the journal Nature Geoscience.

The work, by researchers from Imperial College London and other international institutions, provides the first geological evidence to support previous theories, based on computer models and lab experiments, about how the earliest rocks were formed. The study adds weight to the idea that the first solid material in the Solar System was fragile and extremely porous – much like candy floss – and that it was compacted during periods of extreme turbulence into harder rock, forming the building blocks that paved the way for planets like Earth.

Dr Phil Bland, lead author of the study from the Department of Earth Science and Engineering at Imperial College London, says:

“Our study makes us even more convinced than before that the early carbonaceous chondrite rocks were shaped by the turbulent nebula through which they travelled billions of years ago, in much the same way that pebbles in a river are altered when subjected to high turbulence in the water. Our research suggests that the turbulence caused these early particles to compact and harden over time to form the first tiny rocks.” 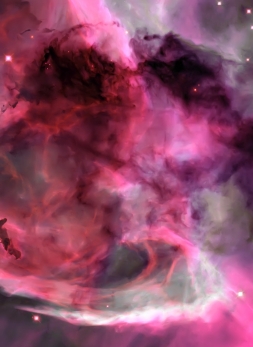 The candy floss-like rocks were formed billions of years ago in the massive disc of gas and dust called the Solar Nebula, before the birth of our Solar System

The researchers reached their conclusions after carrying out an extremely detailed analysis of an asteroid fragment known as a carbonaceous chondrite meteorite, which came from the asteroid belt between Jupiter and Mars. It was originally formed in the early Solar System when microscopic dust particles collided with one another and stuck together, coalescing around larger grain particles called chondrules, which were around a millimetre in size.

To analyse the carbonaceous chondrite sample, the team used an electron back-scatter defraction technique, which fires electrons at the sample. Researchers observe the resulting interference pattern using a microscope to study the structures within. This technique enabled the researchers to study the orientation and position of individual micrometre-sized grain particles that had coalesced around the chondrule. They found that the grains coated the chondrule in a uniform pattern, which they deduced could only occur if this tiny rock was subjected to shocks in space, possibly during these periods of turbulence.

The team also defined a new method to quantify the amount of compression that the rock had experienced and deduce the rock’s original fragile structure.

Dr Bland adds: “What’s exciting about this approach is that it allows us – for the first time – to quantitatively reconstruct the accretion and impact history of the most primitive solar system materials in great detail. Our work is another step in the process that is helping us to see how rocky planets and moons that make up parts of our Solar System came into being.”

In the future, the team will focus further studies on how the earliest asteroids were built.

This research was funded by the Science and Technology Facilities Council.

The full listing of authors and their affiliations for this paper is as follows: