Scientists at Imperial College London have made the most accurate measurement yet of the shape of the humble electron, finding that it is almost a perfect sphere, in a study published in the journal Nature today.

The experiment, which spanned more than a decade, suggests that the electron differs from being perfectly round by less than 0.000000000000000000000000001 cm. This means that if the electron was magnified to the size of the solar system, it would still appear spherical to within the width of a human hair.

The physicists from Imperial's Centre for Cold Matter studied the electrons inside molecules called Ytterbium Fluoride. Using a very precise laser, they made careful measurements of the motion of these electrons. If the electrons were not perfectly round then, like an unbalanced spinning-top, their motion would exhibit a distinctive wobble, distorting the overall shape of the molecule. The researchers saw no sign of such a wobble.

The researchers are now planning to measure the electron’s shape even more closely. The results of this work are important in the study of antimatter, an elusive substance that behaves in the same way as ordinary matter, except that it has an opposite electrical charge. For example, the antimatter version of the negatively charged electron is the positively charged anti-electron (also known as a positron). Understanding the shape of the electron could help researchers understand how positrons behave and how antimatter and matter might differ.

Research co-author, Dr Jony Hudson, from the Department of Physics at Imperial College London, said, "We’re really pleased that we’ve been able to improve our knowledge of one of the basic building blocks of matter. It’s been a very difficult measurement to make, but this knowledge will let us improve our theories of fundamental physics. People are often surprised to hear that our theories of physics aren’t ‘finished’, but in truth they get constantly refined and improved by making ever more accurate measurements like this one." 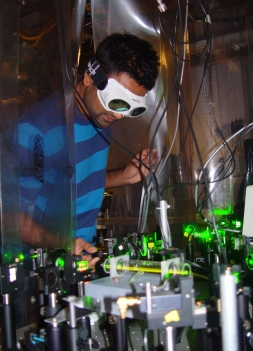 The currently accepted laws of physics say that the Big Bang created as much antimatter as ordinary matter. However, since antimatter was first envisaged by Nobel Prize-winning scientist Paul Dirac in 1928, it has only been found in minute amounts from sources such as cosmic rays and some radioactive substances.

Imperial's Centre for Cold Matter aims to explain this lack of antimatter by searching for tiny differences between the behaviour of matter and antimatter that no-one has yet observed. Had the researchers found that electrons are not round it would have provided proof that the behaviour of antimatter and matter differ more than physicists previously thought. This, they say, could explain how all the antimatter disappeared from the universe, leaving only ordinary matter.

Professor Edward Hinds, research co-author and head of the Centre for Cold Matter at Imperial College London, said: "The whole world is made almost entirely of normal matter, with only tiny traces of antimatter. Astronomers have looked right to the edge of the visible universe and even then they see just matter, no great stashes of antimatter. Physicists just do not know what happened to all the antimatter, but this research can help us to confirm or rule out some of the possible explanations." 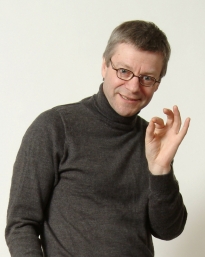 Antimatter is also studied in tiny quantities in the Large Hadron Collider at CERN in Switzerland, where physicists hope to understand what happened in the moments following the Big Bang and to confirm some currently unproven fundamental theories of physics, such as supersymmetry. Knowing whether electrons are round or egg-shaped tests these same fundamental theories, as well as other theories of particle physics that even the Large Hadron Collider cannot test.

To help improve their measurements of the electron’s shape, the researchers at the Centre for Cold Matter are now developing new methods to cool their molecules to extremely low temperatures, and to control the exact motion of the molecules. This will allow them to study the behaviour of the embedded electrons in far greater detail than ever before. They say the same technology could also be used to control chemical reactions and to understand the behaviour of systems that are too complex to simulate with a computer.

This work was funded by the Engineering and Physical Sciences R esearch Council (EPSRC), the Royal Society, and the Science and Technology Facilities Council (STFC).