The malaria parasite is transmitted by some species of biting mosquito

Imperial’s laboratories are home to tens of thousands of mosquitoes that are specially bred to help researchers understand and prevent the spread of devastating diseases such as malaria.

Each year on World Malaria Day scientists around the world are raising awareness of the effects of the disease and calling for more investment to help combat its effects.

Biting back against malaria

In the above audio, Imperial College Podcast caught up with two of Imperial's leading mosquito experts to discuss the fight against malaria: Senior Research Fellow Dr Tony Nolan, and Professor of Infectious Diseases and Immunity George Christophides (pictured below), both from the Department of Life Sciences.

Find out about more developments in malaria from Imperial scientists in some recent news articles.

Read more about the fight against malaria in an award winning  double-page feature in the Spring 2012 issue of Imperial Magazine. 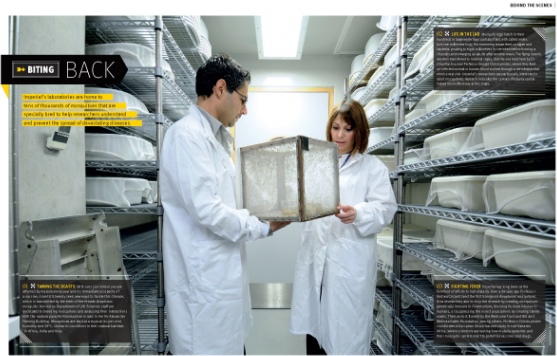 Biting back against malaria