A short train journey from Paddington station followed by a taxi ride through a sleepy village and rolling green fields brings into view a space-age aircraft hangar rising out from behind a clump of trees.

I arrive in the reception hut of what looks like a gleaming metallic fortress and a massive aerial photo on the wall shows that the building I’m in actually bears more than a passing resemblance to a Krispy Kreme doughnut nestled in the Oxfordshire landscape (pictured right).

Diamond Light Source is the only facility of its kind in the UK, Isabel says. This spring marked 10 years since it came into existence, when the government and the Wellcome Trust signed a joint venture agreement to create Diamond Light Source Ltd. It opened its doors five years later in 2007, replacing a 28-yearold synchrotron at Daresbury in Cheshire. “You’ve heard of a particle accelerator?” Asks Isabel. “Well, the synchrotron is a particle accelerator for electrons.” Powerful magnets guide electrons around the doughnut in a 562-metre-long circular path at speeds so fast that they complete 555,000 circuits every second. Unlike the accelerator at CERN, which smashes particles head-on at one of several giant underground detectors, scientists at the Diamond facility use accelerated electrons to create an extremely bright light, which they siphon off in a beam into one of 20 experimental laboratories around the ring, where they sit like junctions on the M25.

Scientists and engineers use these powerful beams of light to illuminate topics as diverse as earthworm digestion, nano-electronics and super-thin solar panels. The synchrotron light beam allows them to see details that ordinary light microscopes cannot.

The structure of the histamine H1 protein was discovered at the MPL, here it is immortalised in perspex

Set up in 2006 by Imperial’s Professor So Iwata (Life Sciences) and University of Oxford’s Professor Dame Louise Johnson FRS, the MPL team have earned themselves a global reputation for their combination of knowledge and expertise. Over the years they have brought new understanding to the biological secrets behind pain, allergy and photosynthesis by helping other scientists to fully visualise the proteins at the heart of these research fields. In fact, they are so proud of their discoveries that models of three of these proteins are immortalised in fistsized blocks of perspex on a windowsill for all to admire.

Isabel joined the team two years ago from drug discovery company Evotec in nearby Abingdon. She manages the laboratory and its external scientific collaborators, whilst directly supervising three Imperial postgraduate students and 11 external PhD students and postdoctoral scientists.

Their well-furnished laboratory sits just across the hall from the beam called I24. It boasts an extensive range of high-tech equipment that can be used by visiting scientists and postgraduate students. There Isabel works with technician Matthew Jennions and alongside colleagues Dr Konstantinos Beis and Dr Alex Cameron (all Life Sciences).

Studying proteins is Alex’s passion. “These bundles of molecules, strung out in twisted, winding chains and intricately folded in on themselves form some of the most complex biological machines in our bodies, few more than one ten billionth of a metre in size,” he explains enthusiastically. “Each protein has its own superpower, the ability to grab a passing molecule or release a waste product from a cell. Almost all these superpowers are activated by a protein subtly changing its shape,” he adds.

To illustrate an application of their work, Alex explains that pharmaceuticals work by interacting in some way with proteins in our bodies, and changing how they behave. For example, antihistamines prevent specific receptors on cells from binding to the molecules that cause allergic reactions. Using new insights gained from work at the laboratory, scientists in pharmaceutical development can design new types of drugs that have fewer side effects – an important concern when it comes to drugs for chronic pain, cancer treatments and antihistamines for common allergies. 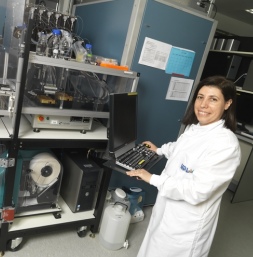 An important step in understanding a protein is creating an accurate 3D model of it, Isabel explains later, which is a straightforward process for around five per cent of proteins that have potential to form new drugs. For the remaining 95 per cent of promising drug targets, the process is more complicated. These are proteins that control what enters or leaves a cell through its surrounding membrane, and are at the centre of many health problems.

To build a 3D model of any protein, scientists need to gather information about it using the beam, often lining up lots of the same type of protein to magnify the image. However, these more complicated membrane proteins unravel and become floppy outside the special conditions that would normally hold them together in the cell, and this makes them very difficult to prepare. Isabel explains that instead, scientists in the laboratory spend many hours painstakingly trying to arrange proteins into the perfect configuration by assembling them into a rigid and uniform pattern called a crystal. Once they have achieved this, the crystals can be stored at a set temperature in giant incubators or fridges before being carried across the hallway to be scrutinised in the beam. “This is a great benefit for the scientists at the MPL,” says Isabel, “otherwise we’d have to transport crystals to labs in Europe or across the Atlantic on a journey many of these delicate structures would not survive.”

According to So Iwata, one of the most exciting things to come out of the laboratory was first seeing a membrane protein, called Mph1, take on three different shapes: “It had long been hypothesised that proteins changed shape in order to perform their superpower, but nobody had been able to provide clear evidence of it happening. Then the beam detected the three steps by which this protein grabbed a passing molecule and spat it back out somewhere else.” This discovery was made by So in 2006, and led other scientists to realise the power of the technique.

Since 2008 the laboratory has helped to unveil the structure of 13 new proteins, but rarely is this research all plain sailing, sa ys Isabel. “Often you need to grow the crystals under really unusual or extreme conditions. This means that sometimes you just can’t put an end date on a project. For example, it may take a long time to experiment and w ork out what temperature makes them grow.” In one strand of work she is looking for new targets for chemotherapy drugs with the help of scientist Dr Anastasia Mylona from Cancer Research UK, although, despite two years of successful experiments, they have not yet had the breakthrough they are hoping to see. 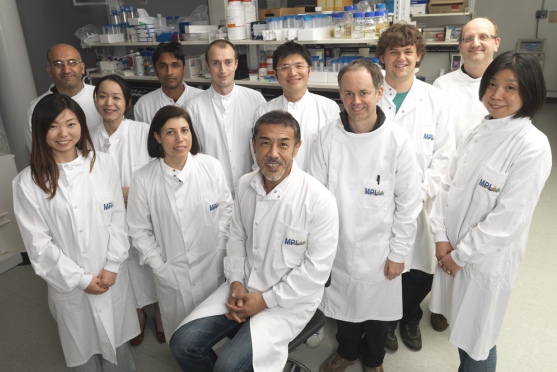 “The MPL plays an important role in developing new technologies for molecular biology,” says Professor Paul Freemont (Life Sciences), who heads up several research units on the South Kensington Campus. “It performs a fantastic service for Imperial researchers and external scientists by allowing them to access the equipment, as well as the expertise at the lab.” Paul has recently taken up a position on Diamond Light Source’s scientific committee, establishing further ties between the College and the facility.

The sun is beginning to set as I say goodbye to Isabel and the team, but the outlook for the lab looks brighter than ever. Imperial has just been awarded a Wellcome Trust grant to help fund new equipment and increase the la boratory’s potential.

As the train carries me home to more familiar urban surroundings, I think back on everything I have seen over the course of the day and reflect that even though this Oxfordshire outpost isn’t based on one of our main campuses, it clearly embraces the Imperial ethos of excellence. I hope to hear about many more discoveries from the Membrane Protein Laboratory over the coming 10 years.