A &pound;24 million cash injection will help realise the UK's goal of commercialising synthetic biology into a range of new industries.

The main aim of the SynbiCITE Centre will be to provide a bridge between academia and industry to speed up the development of new technologies in synthetic biology. This is a field of science where researchers re-engineer cells to develop microscopic devices that can be used to address a range of global challenges such as producing low-carbon fuel, reducing the cost of industrial raw materials and producing new pharmaceuticals. 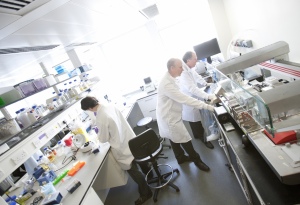 SynbiCITE will be a national resource for universities across the country

SynbiCITE will also be a national resource, involving researchers from a further 17 universities and academic institutions across the UK as well as 13 industrial partners, including the research arms of Microsoft, Shell and GlaxoSmithKline.

“One of the major challenges that industry and academia face in synthetic biology is translating breakthroughs in research into new products. The aim of the new Centre is to break down road blocks so that new industries can be developed, which could ultimately help to safeguard the UK’s economic future,” said Professor Kitney.

“The UK is a global leader in synthetic biology and we hope the establishment of SynbiCITE will help us to capitalise on our research success. The centre will also act as a hub, providing a valuable resource for researchers across the UK,” said Professor Freemont.

Announcing the funding at the SB6.0 Conference on synthetic biology, which is being hosted at Imperial this week, David Willetts, Minister for Universities and Science, said: “The impact possibilities of synthetic biology are phenomenal and it offers the UK a golden opportunity to make the most of its leading edge research. This new Centre will bring our best researchers and industry into partnership, advance our scientific knowledge and support new enterprises in this field.”

The science behind synthetic biology is based on the design and engineering of biologically based ‘parts’, which are made from cells such as harmless bacteria and yeast. These parts are used to make microscopic technologies that are based on biology.

Synthetic biology has been identified by the Minister as one of the eight great technologies that the UK needs to prioritise. Establishing this Innovation and Knowledge Centre was one of the recommendations of the Government report, entitled UK Roadmap for Synthetic Biology, which was published in July 2012.