Latest results from the T2K experiment in Japan

The results confirm early indications that neutrinos change between different types, or oscillate, in three ways where they had previously only been seen oscillating in two ways.

Scientists from the T2K collaboration, which involves Dr Yoshi Uchida and Dr Morgan Wascko from Imperial's Department of Physics, made the announcement at a meeting of the European Physical Society in Stockholm, today.

Following the new findings, the researchers are keen to explore whether neutrinos oscillate in a different way to their antimatter particles (called anti-neutrinos). Equal amounts of matter and antimatter were thought to have existed at the start of the universe but now everything that we know is made of ordinary matter.

If any such differences between neutrinos and anti-neutrinos can be found, this will help scientists explain how all the antimatter has disappeared from the universe, leaving only ordinary matter.

Schrodinger and Heisenberg never imagined seeing this kind of thing!

The three different flavours of neutrinos can spontaneously change into each other, a phenomenon called neutrino oscillation. Interchanges between muon and tau neutrinos, and between tau and electron neutrinos have been confirmed by other experiments, but until now the third way had not been seen.

To explore the neutrinos’ oscillations, the T2K experiment fired a beam of neutrinos from the J-PARC laboratory at Tokai Village on the eastern coast of Japan, and detected them at the Super-Kamiokande neutrino detector, 295 km away in the mountains of the north-western part of the country. Here, the scientists looked to see if the neutrinos at the end of the beam matched those emitted at the start.

In the new data, they found 28 electron neutrinos appearing in the beam of muon neutrinos, where they only expected to see an average of between four and five, which indicated evidence for the third type of oscillation.

In 2011 when early data was released, the scientists had only observed six instances of electron-muon oscillation. Now the team say they have enough evidence to confirm they have observed neutrinos oscillating in every way they expect to be possible.

Imperial physicist, Dr Yoshi Uchida, said: "Using huge volumes of data collected at the T2K experiment, we have been able to check and cross-check the results of our neutrino experiments, and are now ready to make a statement that stands up to scientific scrutiny. What was a strong indication in 2011 of a phenomenon that had never been seen before is now essentially irrefutable." 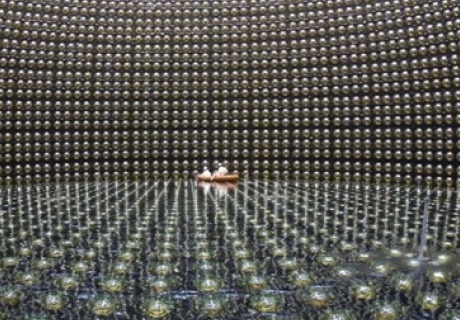 Physicists working inside the Super Kamiokande neutrino detector in Japan

"The exciting thing is that electron neutrino appearance, combined with other neutrino experiments, can help us understand whether there is a significant matter-antimatter asymmetry in neutrinos," Dr Uchida continued.

"The question now is, do the observations from different experiments fit together in a way that seems consistent - and does it help us understand more about the universe."

The Science and Technology Facilities Council (STFC) is the UK sponsor of particle physics and supports the universities involved in the T2K experiment.

Identity of a neutrino

- Neutrinos are electrically neutral, and their masses are known to be of the order of one millionth of the masses of quarks and electrons or less.

- Neutrinos change from one type to another as they travel. This change of type is called 'neutrino oscillation', and it can only happen if neutrinos have different masses.

- Neutrino oscillation was first predicted by scientists Pontecorvo, Maki, Nakagawa and Sakata in 1962.

- T2K has now observed oscillations from muon neutrinos to electron neutrinos, which is one of its main aims.