The sound vibrations that make up music can make solar panels work harder, according to new research, and pop music performs better than classical.

Scientists showed that high pitched sounds like those common in pop and rock music caused the greatest improvement in the solar cells' power output, increasing it by up to forty per cent. Classical music, with typically lower pitched sounds, still increased the cells' output, but not as much.

This discovery makes it possible to power a wider range devices with solar energy than at present, as scientists can improve the efficiency of solar cells using the ambient, or background, noise present in many environments.

We tried playing music instead of dull flat sounds, as this helped us explore the effect of different pitches.

The study is published today by researchers at Imperial College London and Queen Mary University of London, in the journal Advanced Materials. They found that sound levels as low as 75 decibels (equivalent to a typical roadside noise or a printer in an office) could significantly improve the performance of the solar cells  tested in the study.

Practical uses for this discovery could include solar powered air conditioning units, laptop computers or electronic components on buses, trains and other vehicles.

Scientists had previously shown that applying pressure or strain to some materials could create a voltage in the material, known as the piezoelectric effect.  In the study, the scientists showed that manufacturing a piezoelectric material, zinc oxide nanorods, into the solar cells increased their efficiency when sound waves were played. 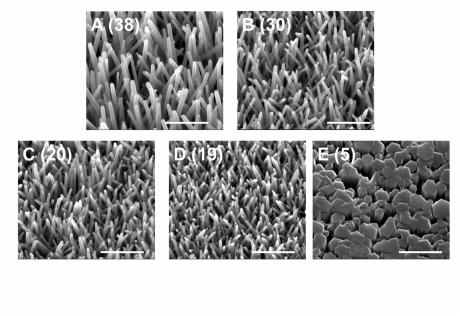 Zinc oxide nanorods were manufactured into the solar cells, increasing their efficiency when sound waves were played

"We thought the soundwaves, which produce random fluctuations, would cancel each other out and so didn't expect to see any significant overall effect on the power output," said James Durrant, Professor of Photochemistry in Imperial's Department of Chemistry, who co-led the study.

"The key for us was that not only that the random fluctuations from the sound didn’t cancel each other out, but also that some frequencies of sound seemed really to amplify the solar cell output - so that the increase in power was a remarkably big effect considering how little sound energy we put in."

"We also tried out how our solar cells responded music, and were amused to find that their efficiency increased more when we played pop music rather than classical, which we now realise is because our acoustic solar cells respond best to the higher pitched sounds present in pop music," he concluded.

"After investigating systems for converting vibrations into electricity this is a really exciting development that shows a similar set of physical properties can also enhance the performance of a photovoltaic solar cell," said Dr Steve Dunn, Reader in Nanoscale Materials from Queen Mary’s School of Engineering and Materials Science.

"The work highlights the benefits of collaboration to develop new and interesting systems and scientific understanding," he added.