This could lead to better therapies to combat leukaemia and other diseases.

The Natural Killer (NK) cell is a type of white blood cell that scans the human body for cells that are cancerous or infected with a virus or a bacterial pathogen, to target and destroy them. NK ‘hit men’ are one of the body’s first lines of defence against cancer.

Scientists have already developed a form of immunotherapy using NK cells, which works by isolating NK cells from donated blood then expanding them in sterile conditions, before injecting them into a patient. This technique has been shown to be effective in treating some forms of leukaemia and it is already in clinical use, but each patient needs up to a billion NK cells and successfully growing this number of cells has proved very difficult.

In a new study, researchers from Imperial College London have made discoveries about how NK cells are produced that could ultimately help scientists to generate a greater number of robust NK cells in culture, to treat leukaemia and other cancers more effectively.

A previous study carried out by the same team revealed that a gene called E4bp4 is an essential gene that has to be switched on to allow the immune system to produce disease-fighting NK cells. The new work shows that E4bp4 is the critical gene that allows blood stem cell progenitor cells to make the decision to turn into NK cells.

The work uncovers a kind of decision tree that genes follow in order to tell the body to produce NK cells. It suggests that E4bp4 is at the top of a genetic hierarchy and that it regulates other genes further downstream, known as Eomes and Id2, which also play an important role in promoting NK cell production. The study is published in the Journal of Experimental Medicine. 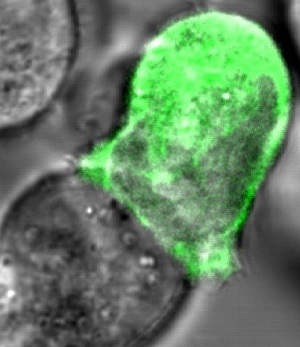 A NK cell (green) binding a target cell prior to destroying it. Credit: Marco Purbhoo

The research was led by Dr Hugh Brady from Imperial College London’s Department of Life Sciences.  He said: “We are excited to find that E4bp4 has such a crucial role in determining the decisive point where blood progenitor cells become NK cells. We are now starting to apply this to human blood stem cells to work out how switching on E4bp4 can allow us to make lots of robust human NK cells in culture. We are hoping to make human NK cells that will have improved survival and be very toxic to cancer cells when transfused into patients. Hopefully, this will allow a big reduction in the number of NK cells needed to treat an individual patient.”

The researchers reached their conclusions after knocking out E4bp4 in a mouse model. They found that blood stem cells first go through a stage where they become progenitor cells before fully committing to one particular blood cell type such as NK cells or red blood cells or platelets. The progenitor cells (NKPs) that become NK cells have only recently been identified. This new study shows that E4bp4 is essential for the formation of NKPs and that the E4bp4 gene is switched on in blood stem cells. The researchers tested many genes known to have roles in the function and production of NK cells but found that only Eomes and Id2 are essential to allow E4bp4 to direct the production of fully functional mature NK cells.

The study was funded by the Medical Research Council.