Scientists have created a new material that can remove double the amount of arsenic from water than the leading material for water treatment.

Arsenic is a toxic element found naturally in groundwater. Long-term exposure over a number of years to elevated concentrations of arsenate, the chemical form of arsenic in water, is associated with debilitating, and potentially fatal, illnesses including cancer, heart and lung disease, gastrointestinal problems and neurological disorders

Arsenic-contaminated drinking water has been identified in many countries across the globe, including Bangladesh, Chile, Mexico, Argentina, Australia, USA and parts of the UK. Recent estimates suggest that more than 200 million people are unknowingly exposed to unsafe levels of arsenic in their drinking water.

In a new study published in Chemistry - A European Journal, scientists at Imperial College London have designed, tested and patented a new zinc-based material that can selectively bind to arsenate with strong affinity. The scientists hope this material could ultimately be used to improve quality of domestic water filters and reduce the amount of arsenic that people are exposed to, in areas with known or suspected high arsenic content.

The scientists found that their novel material removes arsenate to concentration levels as low as two ppb, which is significantly lower than levels achieved by the materials currently used.

Senior researcher Professor Ramon Vilar from the Department of Chemistry at Imperial College London said: “Having a high level of arsenic in drinking water is a serious problem in many countries, putting people’s health at risk. Our new material can effectively and reliably remove arsenate from water and our initial tests suggest that it is a significant step up from what is currently available.”

Lead researcher Chris Moffat, currently studying towards his PhD in Imperial’s Department of Earth Science and Engineering and Department of Chemistry added: “Our material has such high affinity that it is able to remove and ‘mop up’ the arsenic even when concentration levels are low. We hope that it could one day be easily added to water filters to make sure that when you pour a glass of water it is the cleanest it can possibly be, allowing you to control your arsenic exposure at home.”

Adsorption, a process where atoms, ions, or entire molecules attach to a surface, is the most widely used method for removing arsenic from drinking water. Existing adsorbents, however, have been criticised for not being selective in what they remove. By attaching lots of other chemicals in addition to arsenic, these materials can become clogged, saturated and ultimately inefficient.

To improve selectivity and efficiency, the researchers tested three different chemical receptors in an aqueous solution containing arsenate, as well as other ions such as phosphate and sulphate, to test which materials could selectively attract arsenate. They found that a zinc-based material was the best. 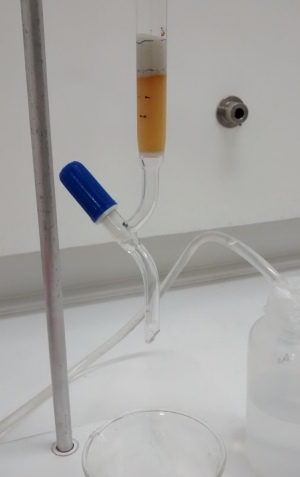 They then attached the chemical receptor to a solid support, a ‘bead-like’ structure called HypoGelTM resin, so that it could be suspended in a water sample. It was shaken in water solutions with different arsenate concentration levels, and was compared alongside the leading existing adsorbent.

Results showed that the Zinc-HypoGel resin had significantly greater affinity to arsenate than currently used sorbents. In particular, they found that it had much improved efficiency at pH values typically found in areas with limestones, which is important because many groundwaters are extracted from limestone aquifers.

When testing the material in natural groundwater samples, results showed that the new material was twice as effective at adsorbing arsenate as the leading materials currently used for water treatment.

Senior researcher Dr Dominik Weiss, an environmental chemist from the Department of Earth Science and Engineering at Imperial College London said: “Our work is at a very early stage so at the moment our estimated material costs per unit are higher than the current available materials. But the idea is that because our material is much better in its ability to remove arsenic it will be much more efficient, therefore you would need less quantity of material to remove more arsenic than current sorbents. If we were to move towards mass manufacture this has the potential to become a cheaper solution. To this end, we are currently funded by NERC to develop the sorbent into a application.”