Imperial is to partner with China's Zhejiang University (ZJU) on a new centre for transnational entrepreneurship in London.

The Imperial-ZJU Transnational Entrepreneurship Centre, to be situated on Imperial’s new White City Campus, will bring together academics from Imperial College Business School and ZJU’s School of Management with entrepreneurs and industry leaders. The new centre is expected to open in 2016-17. 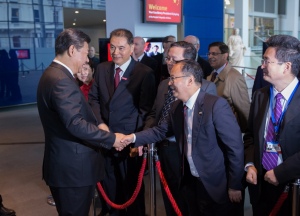 The agreement will enhance connections between ZJU’s city of Hangzhou – one of China’s most dynamic and entrepreneurial regions – and London, where Imperial plays a central role in the capital’s vibrant start-up and spinout culture.

Professor David Gann CBE, Vice President (Development and Innovation) at Imperial, said: “As President Xi’s state visit showed, British and Chinese businesses and academics are well placed to collaborate and innovate together. London can do a lot more to improve its connections with Chinese entrepreneurship. This new centre will allow some of the UK and China’s best academics and entrepreneurs to come together and stimulate new opportunities with a global impact.”

ZJU is a long-standing research collaborator with Imperial. It already supports a centre for applied data science within the College’s Data Science Institute. Last year, a group of academics from both institutions got together at ZJU’s campus in Hangzhou for a special conference on ‘Big Data: Healthy Citizens, Smart Cities’.