Scientists working on five neutrino experiments, including Imperial researchers, have been awarded the $3m Breakthrough Prize in Fundamental Physics.

The prize was set up in 2012 by Russian physicist and internet entrepreneur Yuri Milner to “recognize those individuals who have made profound contributions to human knowledge”. This award for research into neutrinos, which are subatomic particles, follows the success of two neutrino scientists in the 2015 Nobel Prize for Physics.

This year, the Breakthrough Prize in Fundamental Physics is split between hundreds of scientists working on experiments that have made unprecedented discoveries into the nature of neutrinos.

Among them are researchers from the Department of Physics at Imperial: Dr Morgan Wascko, international co-spokesperson for the T2K neutrino experiment in Japan, and Dr Yoshi Uchida, Principal Investigator for Imperial on the T2K experiment. Dr Uchida has also previously worked on KamLAND, another experiment recognised in today’s prize.

Hayley Dunning caught up with Dr Wascko (MW) and Dr Uchida (YU) to find out more about what we’ve learned about neutrinos so far and what’s still left to discover.

What are neutrinos and why are they so important?

MW: They are fundamental particles of matter. They’re the quirkiest, with the fewest properties: for example, they have no charge and only interact through the weak nuclear force.

YU: The fact that they have so little in terms of charge and things makes them very hard to identify and measure – a trillion can go through the detector and we might only see one. But this gives them a specific property in that they can oscillate – transform from one type to another – which is one of the main findings this award recognises. The nature of neutrinos also makes them very pure, and that means that they really probe something fundamental about the structure of matter particles.

There’s also the experimental excitement of measuring something that’s so difficult to measure. Experiments are done on the scale of planets as well as just a few kilometres.

You work on the T2K experiment. How does it work and what is it looking for?

MW: T2K stands for Tokai to Kamioka. It’s an accelerator neutrino oscillation experiment: we use a proton beam at the J-PARC lab in Tokai in eastern Japan to accelerate neutrinos across the island of Honshu to the Super-Kamiokande detector in Kamioka.

Within the standard model of particle physics, there are three flavours of neutrinos and three masses. Oscillation between flavours is governed by three ‘mixing angles’ between the flavours and two mass differences.

Before T2K was built, we saw oscillations occurring in streams of neutrinos in the atmosphere and from the Sun, for which the recent Nobel Prize was awarded, and these gave us information on two of the mixing angles and two of the mass differences. T2K was built to measure that last mixing angle: to find the last possible transformation between two neutrino flavours.

YU: We could have spent 10 years looking, but actually the signal was in the larger range of what we were looking for, and in 2011 we did find the last flavour oscillation. This result is one of the ones recognised in this prize.

MW: The signal was so large that actually we can start looking at antineutrino oscillations as well: whether the antimatter counterparts to normal neutrinos behave in the same way.

What has been your involvement with T2K?

YU: I came along in 2004, when the experiment was still at a blackboard-level concept. Our group led the UK effort to gather participants and write the proposal for our involvement. We had people who were experts in the engineering for the beam producing the neutrinos, but our biggest focus was on the near-detector; the detector that looks at the neutrinos at J-PARC, before they fly 300km to Super-Kamiokande.

We got the funding, built the detector and wrote the software that does the analysis (which we still lead), saw our first data in late-2009, then published the paper in 2011 with our first major discovery. 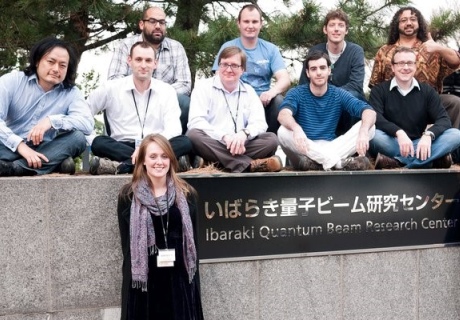 Prizewinners at J-PARC in 2011, including Dr Wascko (middle-right) and Dr Uchida (middle-left)

MW: When the first proposal was written up in 2006 was when I joined. I also worked partly on an experiment in the US called SciBooNE, which was measuring neutrino properties to support the experiments planned at T2K.

My main involvement at T2K is modelling neutrino interactions, another part that underpins the oscillation measurements made at T2K.

What’s next for T2K and neutrino physics?

YU: Currently we’re sending neutrinos to a detector called Super-Kamiokande, but we’re planning for the next generation: Hyper-Kamiokande. This includes upgrades to the beam at J-PARC. Hyper-Kamiokande is a name I hope you’ll hear 10 years from now: that will be the thing we’ll be writing about and hopefully getting prizes for!

MW: The Hyper-Kamiokande detector will be 25 times bigger than Super-Kamiokande, so we’re involved in working out how to calibrate it and understand the new measurements. In the shorter term, we are working on upgrades to all aspects of T2K. J-PARC will upgrade the accelerator in 2018 to give us a more intense neutrino beam, Super-Kamiokande will add gadolinium to the water in the detector for increased ability to observe neutrons, and we are beginning new studies on possible upgrades to the near detectors.

The 2015 Breakthrough Prize in Fundamental Physics has gone to five neutrino experiments. Why do you think it’s important to recognise all of these contributions?

MW: It’s a testament to the wisdom of the prize committee to award it to all these experiments, because some of the experiments discovered characteristics of neutrinos, and others confirmed them and worked out exactly what was happening. The experiments use different energies and distances, from a few kilometres to the distance from the Sun to the Earth. All these point to the same picture: everything is unified and everything agrees.

YU: The two experiments that were honoured in this year’s Nobel Prize are the first experiments that show that something was definitely happening, which was amazing, but to get the big picture of exactly what was happening it really required all of these experiments.