During neurosurgery, surgeons currently deliver medicine and drain fluid by inserting thin, rigid and hollow needles called cannulas into the brain. The rigid structure of the cannula means that it has to be inserted in a straight path and cannot adapt to the changing nature of soft, deforming brain tissue, which could lead to inaccurate placement of the cannula and increase risks for patients.

A team at Imperial College London have developed a prototype robotic needle, inspired by a wood-boring wasp, which is flexible enough to curve, enabling it to get to hard-to-reach places deep in tissue. Now, the team have received an €8.3 million grant from the European Union to lead a four-year project to develop a suite of robotic tools that will use the needle for drug delivery in neurosurgery. 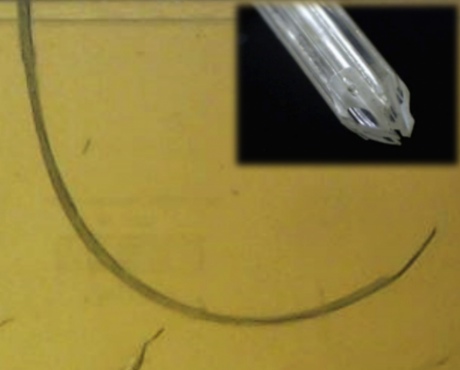 The robotic needle (above) is bendable, enabling it to get to hard-to-reach places deep in tissue.

This new Europe-wide project, called EDEN2020, will see a team of academics and clinicians working alongside industry to develop a pre-commercial system. They hope to be able to begin clinical trials at the end of 2020.

The robotic system is initially being designed to deliver medications to tumours in the brain that do not currently respond well to conventional treatments. However, the researchers believe that their system could also be applied to a range of medical procedures including: brachytherapy, where radioactive ‘seeds’ can be delivered via the needle to cancerous tumours; laser ablation, where an optical fibre is used to direct a laser to burn away cancerous tissue; and deep brain stimulation, where the needle could contain an electrode for treating certain tremor related disorders such as Parkinson’s disease. The robotic needle could also be used to analyse the body at the molecular level, using Raman spectroscopy, to detect cancerous and diseased tissue.

The prototype needle takes its inspiration from female parasitoid wasps, which use a bendable needle-like ovipositor to bore into wood to lay eggs in hiding host larvae. The technology consists of a minimum of three tiny interlocked polymer shafts, which slide alongside one another, mimicking the way the ovipositor works.  The segments move in a complex pattern to minimise the needle's impact on surrounding tissue, enabling it to travel along curved paths with unprecedented dexterity.

In the short video, watch how the robotic needle penetrates a gel-like substance that mimics brain tissue.

Dr Ferdinando Rodriguez y Baena, from the Department of Mechanical Engineering at Imperial, said: “Serendipity is a beautiful thing! I stumbled on the unique qualities of this particular wasp when Professor Julian Vincent, who is a friend and colleague, explained at a dinner how the curved ovipositor worked. Suddenly, I wondered whether we could mimic this attribute in robotic medical technology to improve the delivery of treatments. Six years into the project, we now have a medical grade, clinically sized working prototype, which we hope will ultimately improve outcomes and recovery times for patients with brain diseases.”

Neurosurgery of the future

Ultimately, the team’s aim is that the prototype system will enable a surgeon to carry out an operation using surgical robots, monitoring the process via state-of-the-art medical sensors and imaging technology. 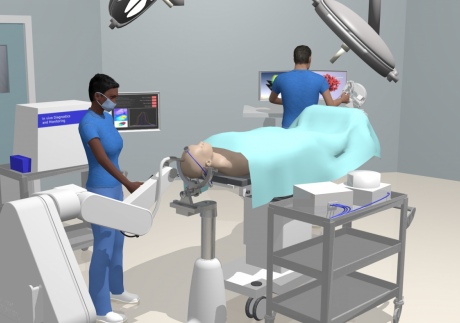 To prepare for an operation the surgeon will feed the patient’s data into a computer program. It will analyse the information and generate the safest and least invasive operation plan to maximise the effectiveness of the therapy. Once the surgeon agrees with the proposed plan, this will be fed into another computer, which will use the information to guide a suite of surgical devices and sensors to execute the procedure, in collaboration with the surgeon.

The robotic needle will be mounted on a robotic arm, which will enable it to be accurately positioned over the patient’s head. The system intelligently guides the insertion of the needle alongside the surgeon, who has control via a haptic joystick, which will provide sensory cues, to ensure the insertion is on target.

The prototype needle will also sense how its shape changes as it travels through tissue and this information will be sent back to the central computer for processing. It will be matched up to 3D scans of the patient’s brain, which will be taken in real-time by a miniature ultrasound device positioned on the patient’s head. This will allow the surgeon to visually track on the console the progress of the robot as it reaches the zone targeted for therapy. When it reaches its destination, the drugs will be delivered through the needle’s hollow shaft.

Professor Lorenzo Bello, from the University of Milan, will head up the clinical team in charge of deploying the system in a clinical setting.

Professor Bello said: “The system could potentially have a significant impact in oncology and in the field of neurodegenerative diseases. It offers an innovative mode of administration of therapeutic agents through the combination of flexible needles and intraoperative imaging systems, which could improve the way clinical diseases are managed.”