Investing in simple diagnostic tests could save lives A pneumonia 'finger clip' and better diagnostic tests could save thousands of lives, say researchers in a supplement in the journal Nature.

One of the studies in the supplement found that wider use of a device that clips onto the finger to measure oxygen in the blood could prevent 148,000 pneumonia deaths in the under-fives, in countries where the disease is most prominent.

Routinely used in hospitals, pulse oximetry is a non-invasive technology that measures oxygen in the blood, and can help doctors diagnose conditions such as pneumonia which trigger low oxygen levels.

The pulse oximeter device - which is around the size of a large mobile phone and can be battery-operated - is not routinely available in community settings. Instead, healthcare workers diagnose pneumonia by techniques such as counting the number of breaths per minute, and observing whether a child is sucking their chest under the rib cage, which suggests they are struggling to breathe.

The authors argue that if pulse oximetry was made more widely available in the community, it could allow children to be diagnosed quicker and sent to hospital for life-saving oxygen and antibiotics. However the authors caution their results depend on a child having reasonable access to a nearby hospital or medical facilities.

"This is a very simple tool that could have a very big impact," says Professor Azra Ghani, senior author of the paper, from Imperial's School of Public Health and Director of the Diagnostics Modelling Consortium.

The new research, published today in a supplement in the journal Nature and coordinated by The Diagnostics Modelling Consortium, was led by scientists at Imperial College London who used mathematical modelling to predict the impact of new diagnostic tools across a range of infectious diseases that affect developing world countries. 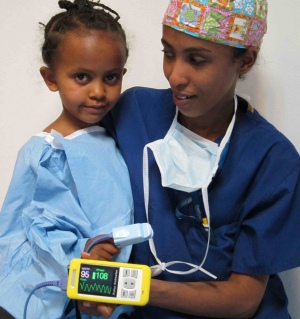 In the supplement, which was funded by the Bill and Melinda Gates Foundation, the researchers also call for investment in diagnostic tools to detect those that are infected but may not show any symptoms of disease.

For example, current diagnostic tests for malaria involve just a blood finger-prick and can therefore be used to identify those carrying the malaria parasite. The researchers show, however, that they currently only identify around half of those that are infected and may go on to infect others.

A relatively simple improvement in these tests to detect a 10-fold lower density of parasites in the blood could increase this to over 80 per cent. This would increase the chance that the disease could be eliminated and also reduce the number of years that it takes to eliminate malaria.

“Increasing the sensitivity of these tests could improve the prospect of malaria elimination”, says Dr Hannah Slater, lead author of one of the malaria papers, based at the School of Public Health at Imperial.

Malaria currently kills 438,000 children each year, but with recent investment from the UK government and the Bill and Melinda Gates Foundation it is hoped that it could be eradicated in the next 30 years.

A third paper from Imperial authors calls for the use and further development of rapid diagnostic tests for Ebola. Testing a patient for Ebola took between two days and a week in the recent outbreak. But in this time the patient had to remain in a 'holding area' - where infected and uninfected patients stayed together until their results were confirmed. This increased their risk of contracting Ebola, as well as taking up limited bed capacity.

The authors calculate that if rapid tests had been available and used from the start of the recent outbreak, it could have reduced its scale by a third.

“The availability of a rapid diagnostic test could have had a dramatic impact on the epidemic and is therefore a priority for future investment, says Dr Pierre Nouvellet, lead author of the paper, also from the School of Public Health at Imperial.

"Developing effective tests to diagnose disease is critical to guide use of other interventions – such as drugs and vaccines," says Professor Ghani, who is based at the MRC Centre for Outbreak Analysis and Modelling at Imperial. “They therefore have the potential to save lives by directing resources to those most in need”.

The supplement, "Infectious Disease Control and Elimination", is funded by the Bill and Melinda Gates Foundation and published in the current edition of Nature