Ancient Aboriginals' use of fire had little effect on erosion Fire was used by ancient Aboriginals to manage the Australian landscape

Ancient Aboriginals' use of fire did not cause much erosion of Australian land, according to new research.

Aboriginal populations arrived on the Australian continent around 50,000 years ago. They used fire to improve access through thick vegetation, encourage new growth to attract game for hunting, and cultivate useful food plants. Some scientists have argued that these burning practises rapidly altered the Australian environment and caused erosion. 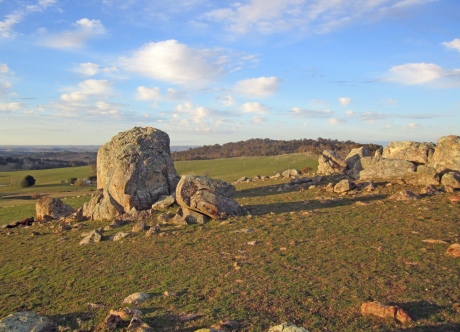 A team of geologists including a researcher from Imperial College London studied rocks and sediment samples from Australia’s south eastern Tablelands, which borders the Great Dividing Mountain Range in the state of New South Wales. They modelled the effects of Aboriginal burning-practices on the rate of erosion in the landscape, compared to long-term natural erosion rates before they arrived. They used a technique to measure the amount of a rare radioactive isotope Beryllium-10 in the rock samples. Beryllium-10 levels indicate how long sediments and rocks have been left exposed on the Earth’s surface, enabling the researchers to calculate erosion rates and also analyse when burning started to impact the landscape.

The study, published in the journal Geology, shows that in south eastern Australia, the impact of Aboriginal populations on the landscape was much smaller and more recent than previously thought. The team found that the burning practices only became widespread across the Tableland during the late Holocene, around 1,000-3,000 years ago. Their analysis showed that the burning practices were not intense enough, or used for long enough, to change significantly the Tablelands’ long-term rate of erosion, compared with natural erosion over the preceding thousands and millions of years.

Dr Dylan Rood, co-author of the study from the Department of Earth Science and Engineering from Imperial College London, said: “These ancient Aboriginal communities were using fire to manage the land, but they were doing it in a way that didn’t impact on the background natural rates of soil erosion until recently. They had a very light touch to land management that was sustainable for tens of thousands of years. Excitingly, our method is helping us to resolve a heated debate and pinpoint when the use of fire to manage the land became intense enough in the region to change the background rates – only a few 1,000 years ago. We believe this method could be applied to other regions of the world to understand land use practices by ancient humans.”

Beryllium-10 occurs when cosmic rays from space hit minerals in sediments and rocks, which splits the oxygen inside to create the radioactive isotopes. The scientists liken this process to a rock getting sunburn, because the longer a rock remains on the surface of Earth, the more exposed it is to cosmic rays, and the more Beryllium-10 is created inside the rock. Measuring the levels of the isotope enabled the researchers to determine how long sediments and rocks had been left exposed on the Earth’s surface, so that they could infer erosion rates.

The researchers then analysed previous radiometric dating and erosion studies of the region over periods of thousands to millions of years. The Beryllium-10 data was then fed into a computer model, enabling the team to calculate erosion rate and timing that best fit the data resulting from varying land use practices carried out by ancient Aboriginal communities over thousands of years, compared to long-term natural erosion rates.

This study builds on the work carried out by Dr Rood. Previously he has used the method to analyse Beryllium-10 in rock samples to determine that European colonisation of North America caused soil erosion to occur a hundred times faster than it would have done naturally. The method has also shown that earthquakes, not an ancient wetter climate as previously thought, is eroding the mountains of Peru.

The team’s work paves the way for more studies to be carried out using this method in the field of geoarchaeology, where geological records are studied to understand in more detail ancient human land clearance activities. They are now aiming to work with teams of archaeologists to determine how early human migrations impacted on other landscapes.