What is a Hackspace and why do we need one? It has over 1,000 members, hundreds of projects and unlimited possibilities, but what is the Hackspace?

Established in September 2014, the Imperial College Advanced Hackspace has grown in popularity around the College community. By facilitating and providing access to workshops across Imperial’s campuses it enables students and staff to produce prototypes alongside the development of ideas and products to tackle some of society’s most pressing issues.

A recent exhibit provided a chance to see some of the projects that have developed with the assistance of the Hackspace, either in providing modest start-up capital or networking opportunities between people from different research areas who can combine their skills to solve an issue.

What is the Imperial College Advanced Hackspace?

Hackspace Manager Larissa Kunstel-Tabet explained:  “The Hackspace here at the College allows members from anywhere at Imperial to come and prototype their concepts, either for research, personal projects or entrepreneurial ideas.“

Dr Nick Jones from the Department of Mathematics is one of the founders and academic leads of the Hackspace. He said: “The reason why we call it the Advanced Hackspace is because we have such resources for idea development at Imperial that we can take the general hackspace concept and take it further.” 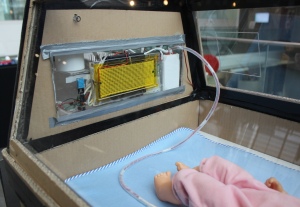 Among the projects to have benefited from the Hackspace is BabyLifeBox, an initiative developed by Design Engineering student Malav Sanghavi. He has created a low-cost baby incubator to reduce infant mortality, after he learned that there are over 300,000 deaths in the first week of life, 99 per cent of which are in developing countries without the resources to help save these children.

Interview with Malav Sanghavi about BabyLifeBox

Sanghavi’s cardboard-based solution received a £500 project grant from the Hackspace to develop the idea from concept into an award-winning prototype.

Dr Oscar Ces from the Department of Chemistry, one of the academic leads of the Hackspace, said: “It’s provided a whole new surface for interaction. It’s far easier now through the Hackspace for a medic to talk to an engineer to talk to a physicist to talk to a computer scientist, and then actually meet in the same space. It’s about providing an area where they can work collaboratively.”

One such group features Millie Clive-Smith, a design engineering student who has also taken a concept through to reality thanks to the Hackspace network. The Co-Founder and Design Lead of Eva Diagnostics, worked with technology developed by co-founder Dr Toby Basey-Fisher and medical experts from the College to devise an affordable, high-quality, reusable blood test device that is as good as the current market leader and far cheaper, enabling government subsidies in developing countries to cover more testing for anaemia.

AnemiPoint was designed for people with anaemia – and there are two billion of them around the world – the technology is now being developed further for additional functions, such as blood count readings for chemotherapy patients. Because it can be done at home and without the need of a medical professional to administer the test, it becomes substantially more efficient and useful for people with often debilitating conditions.

Dr Ces added: “We work on three pillars for the College – research, education and translation. Moving forward we want to make an impact in all those three areas.”

The Hackspace also offers support for creative assignments and pet projects, such as Electrical and Electronic Engineering Student Lloyd Abbot’s digital music box, who is involved with the Hackspace through the Imperial College Design Collective. The device is made using open source code and simple-to-find components. By reprogramming the code, a 16-button box can flick between a drum kit to a DJ set. It can be used by a variety of music editing software and is smaller than the size of a most textbooks, making it ideal for any aspiring musician whose space in university halls may be at a premium.

New workshops continue to be added to the Hackspace and the membership is growing steadily. The group is also aiming to provide a physical space at the White City Campus where people can work on their projects and  industry events can be run. 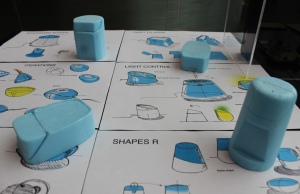 Prototypes of the development of AnemiPoint

Dr Jones added: “It offers the prospect of also linking with the community at White City. It’s interesting because it provides a closer engagement between Imperial and those from that area, rather than just predominantly the South Kensington community.”

“There’s also the potential to bring in the recent alumni who are developing ideas to just find a space where they can bring that forward for about a year,” said Kunstel-Tabet. “It will mean they can still feel as part of the Imperial family.”

The Hackspace runs Thursday surgery sessions at the South Kensington Campus and has brought people together for a wide range of events and activities.

Upcoming events include an educative robotic hackathon, immersive experience exhibition at Imperial Festival, and the Crown Competition, to design a new headress for the statue of Queen Victoria in the College Main Entrance.