A report, launched by the London Sustainable Development Commission (LSDC), proposes a new business district for low-carbon industries, which will embody environmentally sustainable ideals, and ensure the city can lead the way in tackling the causes and effects of climate change.

The Old Oak Common and Park Royal (OOPR) site, which is adjacent to Imperial’s White City Campus, is Europe’s largest urban redevelopment, and would be the most suitable location for London's first such district, according to the report.

Bringing together Europe’s most innovative university and Europe’s largest urban redevelopment could provide a global home for the cleantech sector.

The concept is supported by Imperial College London whose new White City Campus would be part of the cluster and house businesses in the early stages of their development in its Centre for Cleantech Innovation (CCI).

Professor Richard Templer, Director of Innovation at the Grantham Institute, who is leading the CCI, said the cluster would accelerate the development of the next generation of smart, businesses that achieve success whilst minimising waste, energy consumption and greenhouse gas emissions.

He said: “All the evidence shows that there are huge benefits from likeminded businesses being clustered together in one geographic area and being able to draw on centres of academic excellence.

“Imperial’s White City Campus will be able to help businesses in the acceleration phase of their development so they can quickly move from innovative idea to an investible cleantech success story.” 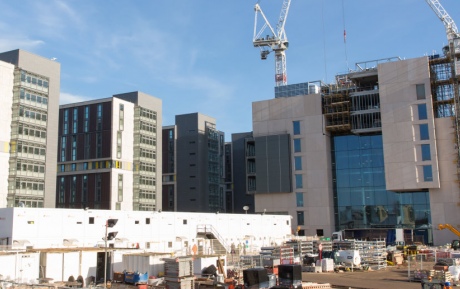 LSDC Chair Lord Barker of Battle said the report, ‘Better Future: A Route Map to Creating a Cleantech Cluster in London’, made a strong case for the development.

Secretary of State for Energy and Climate Change

He said: “The creation of a world class cluster will propel London to the forefront of yet another exciting growth sector.

“The development of a major innovation campus by Imperial College at White City and the simultaneous redevelopment of Old Oak and Park Royal into a smart and sustainable district are essential ingredients to put London ahead in the race to find cleantech solutions to the great climate change and environmental challenges of our time.

“Bringing together Europe’s most innovative university and the UK’s largest urban regeneration site has the clear potential to provide a home of global significance and create a destination of choice for green entrepreneurs and innovators.”

The report was welcomed by the Mayor of London who said the cluster had the potential to transform the green economy in London and the wider UK.

Deputy Mayor for Environment and Energy, Matthew Pencharz, said: “London's thriving green economy is worth over £30 billion and will be one of the biggest global growth sectors in the 21st century. ‎We are a leading centre of innovation; with the entrepreneurs, technical ability, academia and engineering to drive the transition to a low carbon economy.

“To bring all of this together in a cluster of excellence, such as at Old Oak and Park Royal, would ensure the city is a world leader in sustainable technology and put us at the forefront in the fight against climate change.”

Firstly the launch of a global cleantech exhibition and festival in 2018; secondly the creation of a cleantech accelerator; thirdly the establishment of a cleantech incubator and finally the formation of an early stage manufacturing centre to help firms demonstrate proof of concept.

Once the Elizabeth Line and High Speed 2 (HS2) rail networks are complete in 2026, along with the links to Heathrow airport and the motorway system, this cluster will be well-positioned within the communications and transportation infrastructure in the UK.

The new report was also welcomed by The Secretary of State for Energy and Climate Change, Amber Rudd MP.

Ms Rudd said: “The Paris Agreement marked a significant turning point in tackling global climate change. Technology and innovation will be key to implementing this Agreement, and I want those technical solutions to be home grown in the UK, creating new industries and jobs.

'Cleantech' is a catch-all term for innovative technologies and businesses that address the causes of climate change - greenhouse gas emissions - and its effects. Imperial scientists are already working on cleantech technologies like solar photovoltaic cells to generate electricity, and energy storage technologies.

Imperial is now increasing its support for innovations such as infrastructure that will reduce the slow the build-up of flood water in cities using green roofs, a device that erases laser printing from paper, a building material made from straw that can replace gypsum plasterboard as a building material, and a method for producing electricity that removes CO2 from the air. Innovation is the path to low-carbon enlightenment, predicts global energy guru Market forces will put low-carbon technologies in the hands of the consumer Carbon-saving idea claims Mayor's prize for an Imperial team