Nick Aristidou and Will Joyce, two of the co-founders of BioNet, show off their product

The Showcase is the finale of the Venture Catalyst Challenge (VCC) - an enterprise pre-accelerator run by Imperial Innovations and Imperial Create Lab.

BioNet is made up of PhD students Will Joyce, Nick Aristidou and Stelios Chatzimichail, all based in the Department of Chemistry. – They invented the digestible biopolymer to solve a key problem in the farming industry - dangerous and expensive waste plastic wrapping.

I’ve actually eaten bits myself in the lab and quite like the taste.

Currently, hay, straw and silage bales are bound in plastic, which must be removed before the bales can be used for livestock food and bedding. The process is arduous, takes up the farmer’s valuable time, and the waste non-biodegradable plastic ends up in a landfill. If accidentally ingested, the plastic can be harmful or fatal to livestock.

Nick said: “We’ve all seen wrapped hay bales in fields along the motorway. Each of those bales has around 10 metres of plastic on it, and with over 30 million bales produced in the UK each year the scale of the problem is huge.”

The BioNet biopolymer can be wrapped around hay or straw and is safe to be eaten by livestock – saving the farmer time and labour, and reducing waste. The plastic could be bolstered to have nutritional benefits too, which could support healthy milk and meat production. 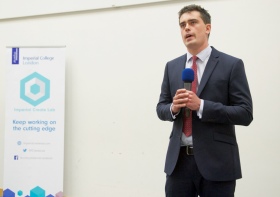 The inspiration for BioNet came from co-founder Will’s own experience working on his parents’ Rutland cattle farm. He spent many hours unwrapping hay bales himself, and was motivated to find a better alternative to the annoying and impractical wrapping.

Will said: “Working on a farm myself I’ve experienced firsthand the hassle of unwrapping hay bales. The plastic is difficult to remove and costly to dispose of. We estimate that wrapping them in our product could save a farmer with a 100-cow herd 1,080 hours typically spent unwrapping the bales.”

While targeted at the farming industry at this stage, BioNet also has potential applications in other areas – such as in the military where food packaging waste needs to be kept to a minimum, in horticulture where plant nutrients could be infused into the polymer and it could be used for planting, or as portion control packaging for pet food.

Nick added: “The edible polymer idea is unique and has the potential to be incredibly versatile in its uses.

“I’ve actually eaten bits myself in the lab and quite like the taste.”

The VCC attracted more than 170 applications from across the Imperial student community. BioNet was one of seven finalists to pitch at the Showcase, with other projects ranging from a new audio identification technology to sustainable fish food. 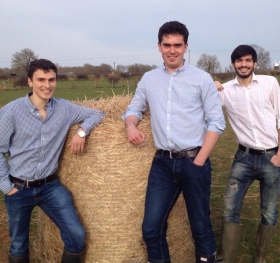 They were chosen as the winner by an expert panel of judges including Imperial’s Vice-President (Innovation), Professor David Gann. He said: “The Venture Catalyst Challenge shows how Imperial’s entrepreneurial culture is creating real value.  At Imperial, we like big ideas. Our researchers and students use their academic talents to solve some of the key challenges of our time, from tackling climate change to improving our health. We’re committed to reducing the time between scientific discovery and societal benefit, and to do that we know that we need our brightest minds to think creatively, work collaboratively, and act courageously.

"The VCC is the perfect illustration of this. By combining deep science and entrepreneurial spirit, these students are translating their ideas into benefits for London, the UK and the wider world.”

Now in its fourth year, the Venture Catalyst Challenge is a six week programme of workshops and development, designed to let teams test the commercial viability of their ideas. It culminates in the Imperial Showcase, where finalists pitch to a panel of judges in the hope of winning the £10,000 prize to help them to bring their ideas to market

The programme includes a mix of master-classes from guest speakers, one-to-one mentoring sessions with industry experts, and group feedback sessions to prepare teams in areas such as customer development, early-stage finance and presentation skills.

Mark Hammond, Co-create Manager, Imperial Innovations said: "The Venture Catalyst challenge is about being able to test the real world commercial viability of high-tech ideas before graduation. Unlike many similar programmes it has nothing to do with writing plans and is instead focused on building prototypes and attracting real world paying customers, the only real test of viability. The fact that participants are able to find paying customers within 12 weeks, whilst completing a PhD, is nothing short of incredible and leaves them in a fantastic position to be at the forefront of a very high potential business immediately after graduation."

You can meet the BioNet inventors and learn about theirs and other enterprising students’ projects in the Futures Zone at Imperial Festival on 7-8 May 2016.

Cyanofeed
A nutritious, sustainable feed for the fish-farming industry made from microalgae and cyanobacteria.

Instatype
A needle-free, point-of-care blood group testing device that is eight times faster than current methods, which rely upon the use of laboratory facilities.

Smart Hybrid
A system to increase fuel efficiency of hybrid vehicles without altering the engine, affecting the user’s experience, or adding any new hardware.

Tangi0
A new way to interact with electronics, replacing complicated controls and sensor based buttons with a flexible touch-sensitive material.

Uquant
A novel form of uncertainty quantification that has diverse applications in GPS, finance and forecasting major global threats.