Scientists and students have developed the DNA tools to modify bacteria normally found in fermented tea so they can customise cellulose production.

Cellulose is harvested in huge amounts from trees and plants to make materials like paper and cardboard. It’s also produced in a very strong and pure form by some harmless bacteria. This bacterial cellulose is currently used in a range of products including materials for headphones, ingredients in cosmetics and occasionally as a leather substitute in clothes.

The real big achievement here is that this was a project from a team of undergraduates that has now become a major research paper.

Now a team from Imperial College London have developed a set of DNA tools to control and engineer a strain of bacteria - normally found in a fermented green tea drink called kombucha tea - to produce modified bacterial cellulose on command. This technique also enables the team to “weave” proteins and other biomolecules into the fabric of the bacterial cellulose as it grows.

This advance in manufacturing and customising bacterial cellulose could pave the way for much wider uses for the material.

One potential application that members of the team are already pursuing commercially could see improved water filters being developed. These could be patterned with proteins that bind tightly to contaminants and remove them from water supplies. The approach would allow a whole range of different filters to be made by the same method, each with very high specificity for the specific contaminant.

Another application could see the material being developed as a fabric with in-built living sensing. The team say the cellulose can be made to produce proteins that detect chemicals like metal and biological toxins and then change the material colour in response as a warning. 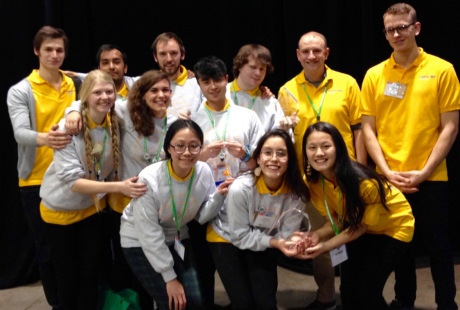 The original iGEM team who developed the DNA tool, withDr Ellis in the back row

This research was led by a team of undergraduates from Imperial College London in the spare time between their courses, in the field of synthetic biology. This is where scientists are engineering cells into biological machines that can perform new pre-determined functions. The team in today’s study are one of the first in the world to apply synthetic biology to change the way that materials are produced.

They have called their cell Komagataeibacter rhaeticus iGEM (K.rhaeticus). Michael Florea, who recently graduated from Imperial’s Department of Life of Sciences, led this project as part of his undergraduate studies.  It started as a student project that was entered into the 2014 International Genetically Engineered Machine (iGEM) competition - an international student competition in synthetic biology between more than 200 universities. They came second in the competition.

Florea said: “Part of our bacteria’s name is in honour of its humble beginnings at the iGEM competition, but since then this technology has evolved greatly. What makes this approach so promising is that we’ve shown that bacterial cellulose production can be genetically controlled, which means that we grow material with different shapes, patterns and sizes. We can also weave in other proteins and biomolecules, which has never been possible before.”

In the research, which is published today in the journal Proceedings of the National Academy of Sciences, the team describe the suite of DNA-encoded components with which they can engineer the K.rhaeticus cells to make them into mini-factories for producing customised bacterial cellulose. The re-engineered K.rhaeticus recognise synthetic DNA and promoters and can produce fluorescent proteins in the cells when they detect certain chemicals. By swapping in different DNA programs the same components can be used for turning cellulose production on and off.

Dr Tom Ellis, who is also a co-author from Imperial’s Department of Bioengineering, said: “The real big achievement here is that this was a project from a team of undergraduates that has now become a major research paper. Bacterial cellulose is a remarkable material that is malleable, safe and strong. We believe the tools developed by the students will take manufacturing of this product into the twenty first century.”

The next step will see the team exploring future uses with a variety of collaborators including scientists at NASA who are interested in using microbes to make useful materials on Mars in the future. They are also in talks with representatives in defence, and the fashion and textiles industry about potential applications.

This research was carried out by the students while studying at the Centre for Synthetic Biology and Innovation at Imperial College London. The Centre is co-directed by Professors Richard Kitney, from the Imperial’s Department of Bioengineering, and Professor Paul Freemont, from the Department of Medicine at the College.