Thirty nine members of staff and three research groups have been chosen to receive President's Awards for Excellence in Education and Research.

The awards recognise excellence in both education and research across nine categories.  Within each category those awardees judged to have made particularly exceptional contributions are selected to receive the President’s Medal. 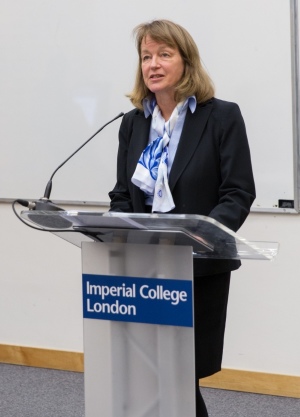 Awards in the Education stream recognise staff who have made outstanding contributions in teaching, pastoral care, research supervision and supporting the student experience.

Dr Benita Cox, from the Business School, received a President’s Medal for Excellence in Pastoral Care.

She said: “I was thrilled when I won, tearful even. I’d even already explained to my nominator why I wouldn’t get it. I was only doing my job.

“I think it’s really important students feel they matter. In big places it’s easy to get lost. I try to help every student achieve what they want to achieve, not just in academic excellence. I listen and help as best I can.”

“I’ve been in a pastoral role at the College for about ten years. I’ve seen incredible changes to pastoral care in that time. There are now excellent support structures in place. The College takes pastoral care really seriously now which is excellent to see.”

The Research awards recognise excellence in innovation and entrepreneurship, engagement and partnerships, and research support, as well as awards for an outstanding research team and early career researcher.

We try to add value to the submission before it’s sent off and make sure all the information is in on time. It’s often a bit of a last minute scramble with proposals coming in, but we always manage to get them in by the deadline..

Shaun said: “Getting the award was a nice surprise. John and I have worked together for about nine years now supporting academics to prepare their research applications in the faculty.

“Working with research proposals, we try to add value to the submission before it’s sent off and make sure all the information is in on time. It’s often a bit of a last minute scramble with proposals coming in, but we always manage to get them in by the deadline..

“We’ve both developed close relationships with academics in the faculty. The funding system is becoming much more competitive and everyone is being forced to raise their game. I like to think we help in making sure academics have the best chance of getting the funding they need.”

Nominations were made by staff and students from across the College, with the winners of each award decided by selection panels overseen by the Acting Vice-Provost (Education) and Vice-Provost (Research).

Award recipients will receive their awards from Imperial’s President, Professor Alice P. Gast, at a ceremony later this year.

Professor Gast said: “Congratulations to this year’s winners. You have made vital contributions to the excellence of our university through its operations and our world-class teaching and research.

“Our College strategy recognises the importance of harnessing our collective strength across all disciplines, functions and activities. A key part of realising this goal is recognising colleagues who have achieved excellence.

“Thank you also to everyone who took part in the nomination and selection process.”

One of the most contested awards was the Supporting the Student Experience category for which Susi Underwood, from the Department of Chemical Engineering, was one of the medal winners.

Susi said: “Winning a President’s Medal is great. I saw the student nominations for it and it’s really nice to be recognised for what you do.

“I really like to get stuck in with everything that goes on at the College beyond my job. I’ve volunteered at the Imperial Festival, I help organise the PhD Symposium and as part of my role in the choir I help support students when they graduate from the Choir on Commemoration Day.

“Imperial is not just a job for me, I love what I do. I help out on moving in weekend each year. Everyone in my office thinks I’m mad but it’s really my favourite weekend of the year seeing all the new students begin their journeys at the College.”