These sand dune formations in the distance are unique to Mars

NASA discovers more about Mars' ancient atmosphere by studying a dune system, which is named in honour of an Imperial Fellow.

The Mars Science Laboratory (MSL) mission is a long-term effort by NASA to robotically explore Mars. As part of the mission a car–sized roving laboratory called Curiosity is travelling across Mars’ Gale Crater and steadily climbing up the side of Mount Sharp, located at its centre. Curiosity is helping scientists to assess whether Mars ever had an environment that could support simple life. 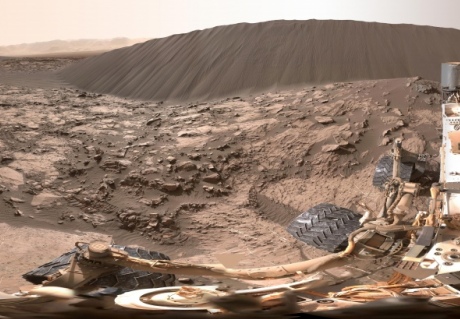 Part of the Bagnold Dune imaged by Curiosity

The rover is currently carrying out the first ever investigation of desert dunes on another planet. The NASA team have named them the Bagnold Dunes in honour of Brigadier Ralph Alger Bagnold FRS OBE (1896 -1990). Studying the Bagnold Dunes and ancient rock formations has suggested to the team that by 3.7 billion years ago Mars’ atmosphere was already thin.

Bagnold was the founder and first commander of the British Amy’s Long Range Desert Group, which was a reconnaissance and raiding unit based in North Africa during World War II. He is generally considered to have been a pioneer of desert exploration. He wrote the first book on the movements of sand by wind, called The Physics of Blown Sand and Desert Dunes. Watch an old interview with Bagnold in the video Blown Sand. 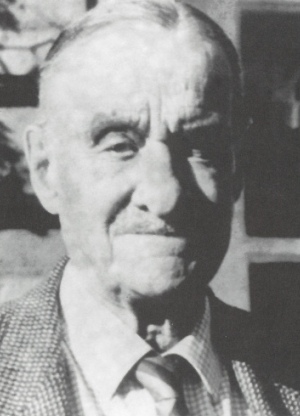 In the 1930s and 1940s, Bagnold was a visiting researcher at Imperial College London, building its first wind tunnel, and writing a book on the subject.

Professor Sanjeev Gupta, a fan of Bagnold’s early work, is part of the NASA Curiosity team from Imperial’s Department of Earth Science and Engineering.

Professor Gupta said: “I am thrilled that we have been able to name the first ever extra-terrestrial dune system explored on the ground after an Imperial luminary. Ralph Bagnold was one of the first researchers to really understand the physics of dune systems. While he was never one to seek acclaim for his efforts, I know he’d be so excited to see how his work is being applied to understanding dune systems on another planet.”

Wind-blown dune systems are abundant on Mars, but have never previously been investigated on the ground. The study, published today in the journal Science, involved looking at how wind on Mars blows and moves sand in desert dunes. The investigation also included looking at how the sand is deposited and the chemistry of the sand grains.

The team have discovered a new class of sand dune formed by wind called wind-drag ripples. These are not observed on Earth. The researchers suggest that these ripples are formed as a consequence of the low density of the Martian atmosphere. NASA research: Martian lakes may have survived on surface for millions of years Ancient fresh water lake on Mars could have sustained life Pebbles help explain Mars' watery past Curiosity finds evidence of ancient riverbed on Mars Imperial researcher in effort to find evidence of habitability on Mars Martian science gets a boost thanks to funds from UK Space Agency