Imperial has recognised the hard work and dedication of many of its academics with the 2016 round of promotions.

One hundred and twenty-four academics (pdf) at Imperial College London have been promoted this year. These promotions acknowledge the achievements of staff from the Faculties of Medicine, Engineering and Natural Sciences.

This year, the Provost’s Board has approved the introduction of a new Professor of Practice title. The title, awarded to five people, recognises individuals who have made an outstanding contribution to education, research or leadership outside of the established criteria for a professorship.

Professor Nigel Gooderham, Assistant Provost (Academic Promotions), said: “As Chair of the Academic Promotions Committee, I am fortunate to see the development of our academics as they progress from lecturer to professor. We have people within our ranks whose academic activities can only be described as ‘jaw-dropping’ and such individuals will underpin and promote the position of Imperial as a global university for some time to come. It is a privilege to work alongside these individuals and a pleasure to see them move successfully through our promotions process. So, I offer my congratulations to all of those promoted this year; I look forward to following your continuing success.”

Professor Anne Dornhorst, a leading diabetes expert, is one of the first members of staff to become a Professor of Practice.

She first joined the College in 1995 as an honorary senior lecturer and she is also a diabetes consultant at Imperial College Healthcare NHS Trust.

Her key research area is diabetes during pregnancy, which she believes is a driver of the global obesity crisis.

"The number of pregnant patients I see in my clinic with diabetes has vastly increased over the last 20 years, and this is due to weight. The disease not only has implications for the mother's health, but also for the baby. Evidence suggests the disease causes changes in the womb that may make a baby more susceptible to diabetes and obesity in childhood.”

She added: “If we tackle obesity in pregnancy we may be able to lower health risks for the mother and baby.”

“Having a career and a young family is certainly not easy – when I was a junior doctor I would race home to read my two sons a bedtime story, then head back to the wards once they were asleep. There are sacrifices, but you have to believe you’re setting your children a good example by working, and maintaining your career.”

Professor Dornhorst hopes her academic promotion will inspire female academics. “Becoming Professor of Practice is an enormous honour, and will hopefully show women at the early stage of their career that a Professorship is possible.”

Dr Tae-Kyun Kim has been promoted to the role of senior lecturer. His research is in the field of computer vision and learning. In particular, he is developing the next generation of hand gesture recognition technology, where hand and body movements are used to control computers.

Current examples such as Microsoft’s Xbox can only detect a limited amount of gestures, limiting the extent to which the technology can be used. Dr Kim and his team are refining the technology so that it can detect more complex gestures, which will make it feel more seamless and natural for users. This could pave the way for its incorporation into a wider range of technologies such as making virtual reality environments more realistic. 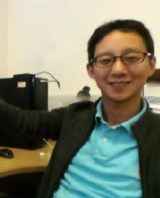 Dr Kim said his promotion is in part a reflection of the great work of his research group: “The ability to successfully attract a research group is so important for any academic, but I am the first to admit that it can be a struggle. I’ve stuck to the advice that was given to me, which is to recruit people who can contribute their ideas to the group so that others can benefit. I also think it is always important to encourage team spirit, open-minded discussions and collaborations to get the most out of your group.”

Dr Marina Kuimova has been promoted to Reader in Chemical Physics. She uses fluorescence imaging to investigate processes involved in the normal functioning and death of biological cells and tissues, with applications both in medicine and in pure research in biology and biophysics. Recently, her group discovered that cancer cells become more ‘gloopy’ as they die, an insight that could have therapeutic applications.

On her promotion, Dr Kuimova said: “I am delighted to have received this recognition from my peers. Being an academic at Imperial is a fantastic opportunity for anyone fascinated by research, at any stage of their career.

“In fact, I spent quite a big chunk of my postdoctoral career at Imperial and for me, it provided multiple opportunities to interact with colleagues at the top of their game, recruit talented students and postdocs and come up with multidisciplinary ideas.

“This promotion comes very shortly after my return from maternity leave and receiving recognition from the College at this critical time spurs me on and motivates me to strive for even more in the future.”

For those researchers just starting out in their career, Dr Kuimova had some advice: “Modern science is a team effort, both in terms of creating a multidisciplinary network of collaborators as well as choosing the members of your own group.

“Choose your network well: work with people you can trust, who respect your scientific opinion and your style of work. Most of all, make sure you enjoy working with these people! My promotion is certainly as much a credit to my team and my collaborators, as it is to my own efforts.”