Audience members and experts explored what it would mean to produce food sustainably, and how we can achieve this for the world's growing population.

People with an interest in all things 'foodie' came together at an event jointly organised by the Grantham Institute and The Ecotarian, an initiative led by students on the Science and Solutions for a Changing Planet Doctoral Training Partnership, which was held at Imperial College London last week.

Expert panellists on farming, agricultural science and economics shared their insights about how to make food production more sustainable, as the impact of global eating increases. Suggestions included improving  quality of life for farmed animals and relaxed regulation of genetically modified (GM) crops, to dramatically increasing the funding for research into innovative agricultural practices.

The audience also put forward their ideas on the most effective measures, recommending responsibilities for food producers, government, retailers and consumers in supporting new initiatives.

The way that food is currently processed, distributed and stored has a range of potential environmental impacts including climate change, land degradation, water shortages and loss of biodiversity. In order to establish a fair and green food system that will continue to provide for future generations, those assembled agreed that a fundamental shift is therefore needed. 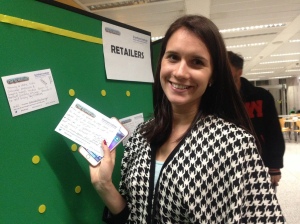 Audience members shared their ideas on improving the food system

Power to the people

Throughout the discussion, a clear role emerged for individuals to instigate change by taking greater responsibility for their food choices. People agreed that everyone would benefit from taking an interest in what their food is and where it comes from, and making conscious decisions to limit the impact of their diet. Through this, consumers have the power to shift the attitudes of producers and retailers.

The Ecotarian team invited individuals to consider the implications of what they eat, and handed out their top tips for a sustainable diet at the event.

In this profile, they share their thoughts on what it means to be an ecotarian, how the project came about and where it will take them next.

The piece first appeared as a feature in the annual Grantham Institute Outlook 2016-17.

The Grantham Institute - Climate Change and the Environment, is one of Imperial’s global challenge institutes, which aims to shape the College’s priorities in this area: to inform government, business and industry, and civil society; to create and appraise expert knowledge; to train the next generation of leaders; and to support innovation. 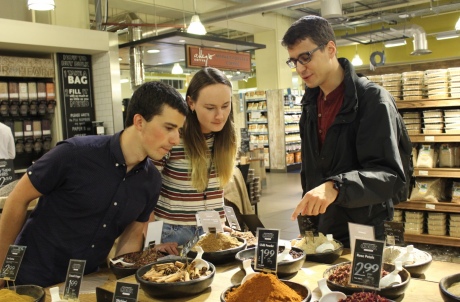 Arnaud Koehl, Clea Kolster, Ronan McAdam and Naomi Pratt, PhD students on the Science and Solutions for a Changing Planet Doctoral Training Partnership, are spreading the word about green lifestyles beyond Imperial through a new initiative called The Ecotarian.

Group member Naomi Pratt says an ecotarian is ‘someone who buys and eats food in line with eco-friendly principles’. This means limiting the environmental impact of their diet, perhaps by reducing meat consumption, through buying more local food or just by being more aware of how their food has been produced.

Clea Kolster says that the group chose food as the focus for their team project in the Doctoral Training Partnership programme because of their shared love of good food, and because of the impact of food production and distribution on critical environmental issues including land use and climate change.

As well as this panel discussion, The Ecotarian has already been on show at the Imperial Fringe and at other public events.

One of The Ecotarian’s best-received initiatives is a map of London’s green food projects and restaurants. It has been published on The Ecotarian website and users can add their own favourites. You can also follow the Ecotarian on Twitter for updates on their latest blogs and recipes.

The Ecotarian's 5 tips for greener eating

1. GROW YOUR OWN. Loads of vegetables will tolerate indoor conditions. If you have a balcony, there’s no excuse. Also, there are a surprising number of community gardens and allotments in London.

3. SHOP LOCAL. Take advantage of the smaller shops in your area, such as bakeries, butchers and fishmongers, or organic veg boxes direct from farmers. This is a great way to reduce food miles.

4. EATING OUT? The nexttime you eat out, think about choosing a restaurant that is clear and proudof its supply chain. Vegetarian options are also a great way to save money.

5. CHECK LABELS. For fish, look for the blue Marine Stewardship Council logo. The Soil Association logo is used for most organic produce. For eggs, free-range doesn’t ensure high-welfare so pick a supplier you trust. Avoid palm oil - it plays a large role in deforestation. Bioenergy crops are not a risk to food production, says a new report In tweets: Imperial Fringe whets appetites at nutrition-themed evening