The cost to an NHS hospital of a superbug outbreak is nearly &pound;1 million, according to a new study.

The team say the research, which is the first ever rigorous cost analysis of a CPE outbreak, will help inform infection control, as well as highlight the financial need to prevent such events.

Professor Alison Holmes, lead author of the research from the Department of Medicine at Imperial, said: “Antibiotic-resistant bacteria represent a major global threat. However if we are to get to grips with this danger we need to fully understand all aspects of antibiotic resistance – not just the human cost but also the financial implications for healthcare.”

This study showed the staggering costs of just one outbreak

The group of CPE bacteria, which include bugs such as E.coli and Klebsiella, are resistant to many types of antibiotic, but what makes them particularly threatening is that they are resistant to antibiotics of last resort called carbapenems.

CPE bacteria can live harmlessly in the gut of many patients, but they can occasionally cause serious infections if they get into other parts of the body such as the blood stream, lungs and urine.

Outbreaks of these bacteria, which are spread from patients who may carry the bacteria in their gut, are an increasing problem in hospitals - particularly across Europe, India and the US.

In the latest study, published in the journal Clinical Microbiology and Infection, the team calculated the cost of an outbreak last year across five hospitals in West London.

The researchers split the costs into ‘actual expenditure’ such as increased patient screening and ward decontamination, and ‘opportunity costs’ such as extra staff time and the cost of cancelled operations.

During the outbreak, 40 patients in renal and vascular wards were identified with the same strain of CPE, a type of Klebsiella bacteria.

Four wards had to be closed, with patients previously in the wards checked regularly for the bug.

During the 10-month period 13 infected patients died, although these deaths were not directly attributable to the bacteria. 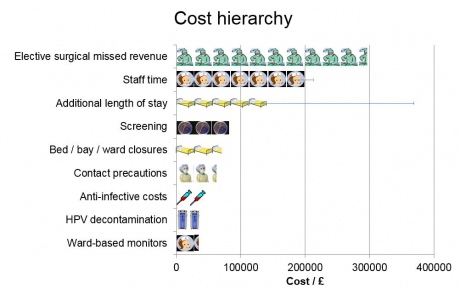 Cost breakdown of the superbug outbreak

The greatest cost was found to be missed revenue from planned surgical procedures, which totalled £296,000. Hospitals receive payments from the NHS for every procedure they perform. However, due to many beds being unavailable during the outbreak while the wards were closed, 72 planned operations were cancelled.

Other costs included £84,000 for additional laboratory time and resources required for patient screening, and £37,000 for decontaminating 24 single patient rooms with a bacteria-killing solution of hydrogen peroxide vapour.

Furthermore, extra staff time was calculated as costing just over £193,000, and even changing mattresses and bedside curtains was found to exceed £5000.

Dr Jon Otter, an author of the study from the Department of Medicine said: “This study showed the staggering costs of just one outbreak. Although the outbreak was under control within a couple of months –- the time from initial identification to declaring the outbreak over was ten months. This is time frame is not unusual, and the findings are applicable to other such CPE outbreaks across the country.”

Professor Holmes added that CPE is a growing problem in the UK, and hospitals need to redouble efforts to prevent outbreaks.

“This study highlights the cost to the NHS of antibiotic resistance, and why a relatively small investment in infection prevention strategies could save money in the long term. We also need to ensure antibiotics are only prescribed when needed, to help tackle the growing epidemic of resistance.

"Counting the cost of an outbreak of carbapenemase-producing Enterobacteriaceae: an economic evaluation from a hospital perspective" by J.A Otter et al is published in Clinical Microbiology and Infection