Regular cannabis use over many years lowers levels of dopamine, which plays a key role in how the brain processes motivation, pleasure and reward.

This can reduce motivation and induce negative emotions, which may help to explain why cannabis is associated with mental illness.

In a review of the state of current research published in the journal Nature, scientists examined the action of dopamine through detailed analysis of multiple studies involving brain scans of long-term cannabis users. They say there is now conclusive evidence that cannabis blunts dopamine levels, and that it’s critical to understand exactly how this happens and what it means for the health of users.

We urgently need to better understand how cannabis affects the brain, to help policy makers and individuals make informed decisions. If it turns out that it’s bad news to take cannabis then we need to know now, before people take the gamble.

Cannabis is a widely used recreational drug across the globe. Last week, four states in America legalised it for personal use and four for medical use. Over half of young Americans use cannabis in their lifetime, and in Europe more people enter specialist clinics with an addiction to cannabis than to heroin.

Heavy cannabis use is associated with an increased risk of mental disorders such as psychosis, addiction, depression and suicide. According to the researchers there are no effective treatments and this is a pressing concern for global mental health.

Professor Oliver Howes, a psychiatrist at the MRC Clinical Sciences Centre (CSC) at Imperial College London, who led the review, said: “We urgently need to better understand how cannabis affects the brain, to help policy makers and individuals make informed decisions. If it turns out that it’s bad news to take cannabis then we need to know now, before people take the gamble.

“The dopamine system is central to learning and motivation. We conclude that long-term cannabis use in people is linked to blunting of the dopamine system. In this respect cannabis is similar to cocaine or amphetamine, although probably not to quite the same degree.” 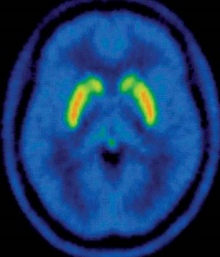 Co-author Dr Michael Bloomfield, a Clinical Lecturer in Psychiatry also of the CSC and University College London, said: “The changing patterns of cannabis use, including ‘cannavaping’ and edible products, mean it’s vital that we understand the long-term effects of cannabis on the brain. This new research helps to explain how some people get addicted to cannabis, by showing that one of its main components, called THC, alters a delicate balance of brain chemicals.”

Image caption: Brain scans in people who use cannabis show that long-term use lowers the level of dopamine (orange), the chemical ‘messenger’ which plays a key role in the wayour brains process reward (Credit: MRC CSC).

It’s thought that THC (tetrahydrocanabinol) is the component of cannabis that makes users feel euphoric, or ‘high’. The concentration of THC in cannabis is increasing as growers select plants that induce the strongest ‘high’, and some new synthetic drugs mimic its action. THC is known to alter dopamine levels, and has been linked to the harmful effects of cannabis, including addiction and psychosis.

If scientists can work out how THC changes dopamine levels, they may be able to develop ways to treat or even prevent cannabis-induced illness.Such treatments may prove particularly important in those whose brains are still developing, such as adolescents, and are therefore most vulnerable. The brains of infants in the womb may also be at risk.

Professor Howes says that as cannabis use increases, there may be an increase in the number of women who use it during the early stages of pregnancy, before they know they’re pregnant. Professor Howes says research in animals could help to explore this. Studieson the long-term effects of cannabis can be performed quicker in animals, which have a shorter lifespan than people. 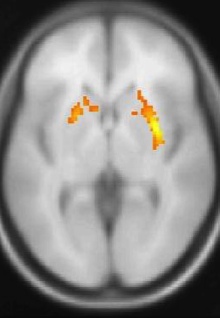 This speed could be important to help to inform new policies and regulations on cannabis use. “Given the increasing use of cannabis, particularly in young people and women who maybe pregnant, animal studies are needed to understand the effects of long-term cannabis use on the developing brain in a controlled way that is not possible in human studies. These studies also need to use techniques that can be translated into human studies, and to better represent human patterns of use,” he said.

Image caption: The brains of long-term cannabis users show adecrease in dopamine production compared tonon-users. This computer generated brain‘map’ shows where this difference isstatistically significant (yellow), which meansthe results are unlikely to be due to chance.(Credit: MRC CSC).

Previous studies in animals have explored only the short-term effects of cannabis. These show that cannabis initially raises dopamine levels, which may feel rewarding and could help to explain why people become addicted. It’s known that repeated exposure then blunts dopamine, as is seen in brain scans in people. This blunting could help to protect the brain against excess dopamine, though it is abnormal and potentially harmful.

“Fundamentally, animal studies are too short, and don’t give cannabis repeatedly or in combination with other substances,” said Professor Howes . “We also identify a number of areas where new studies are needed, particularly on what happens to the dopamine system after someone stops using cannabis, and the effects of combining cannabis with other substances like alcohol and cigarettes."

The review recommends scientists now explore whether changes in the brains of adolescents who consume cannabis persist into adulthood. It also suggests identifying whether having certain genes makes people more or less susceptible to addiction and chemical changes in the brain. The CSC team worked with scientists at Kings College London, the National Institute of Drug Abuse, USA, and University College London to produce the review.

'The effects of Δ9-tetrahydrocannabinol on the dopamine system' by
Michael A. P. Bloomfield, Abhishekh H. Ashok, Nora D. Volkow & Oliver D. Howes is published in Nature. Magic mushroom compound tested for treatment-resistant depression The brain on LSD revealed: first scans show how the drug affects the brain Long-term cannabis use may blunt the brain's motivation system