The College has been recognised by Understanding Animal Research for its communications around the number of animals used in research.

At the annual awards for Openness on Animal Research, held on 5 December 2016, Imperial was presented with a Highly Commended award in the Public Engagement Activity category.

Every year, Imperial publishes data about the numbers of different animals used in its research activities over the past 12 months. This year, in an effort to give people a better understanding of how and why these animals are used in research at the College, Imperial published a news story and produced a short video for social media explaining the numbers.

The communications team also produced a podcast featuring an audio tour of an animal facility, and an interview with an animal technologist and a researcher. These helped to explain why Imperial uses thousands of animals in research and what a ‘procedure’ involving animals might entail.

Professor Chris Higgins, former Vice-Chancellor of Durham University, presenting the award, said that Imperial “has taken enormous steps towards openness and has really embraced change. It has done a phenomenal job in becoming open on the animal research that it does.

“They had a social media engagement that reached a great audience around the country and internationally, and was accessible to many who had no involvement with animal research at all for the first time. They had a great video and a proactive approach that was truly leading.” 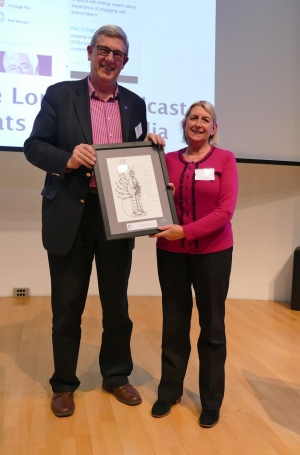 Mandy Thorpe, Director of Central Biomedical Services, who accepted the award on behalf of Imperial, said: “It was fantastic to be recognised for our ongoing work in being more open about our research involving animals.  At Imperial we are committed to sharing the results of our research, and when that has involved animal studies, we strive to explain how and why animals were involved.

“Our communications form a crucial part of our aim to be proactive in providing opportunities for the public to find out about research using animals.”