A study of Greenland's history reaching back millions of years shows that the ice sheet expands and rebounds in response to global changes in climate.

The ice sheet covering Greenland is four times bigger than California, and holds enough water to raise global sea level more than six metres if most of it were to melt.

Today, sea levels are rising and the melting of Greenland is a major contributor, so knowing how it has responded to changes in global climate in the past is important for predicting its future.

It is amazing to me that such a small number of atoms can help solve a big problem– what is likely to happen to the second-largest ice sheet on Earth and how it is likely to contribute to rising sea levels.

However, most studies of the ice sheet are conducted by taking core samples of the ice, which only hold a record of the last few thousand years.

Now, by using a new technique that analyses samples of bedrock preserved in ocean sediments, a team led by the University of Vermont and including researchers from Imperial College London, have been able to look back several million years into Greenland’s past.

Their study, published this month in Nature, reveals that the ice sheet in East Greenland has not completely melted for long, if at all, in the past several million years.

The team also collected samples of rock on land, which revealed that during major climate cool-downs in the past several million years, the ice sheet expanded into previously ice-free areas. 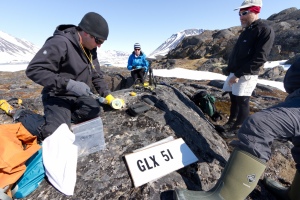 The team sampling rocks in Greenland

Study co-author Dr Dylan Rood, from the Department of Earth Science and Engineering at Imperial said: “Our work provides compelling evidence that although the East Greenland ice sheet has advanced and retreated with changing climates over millennia, the results suggests it has always been present in some form for the past few million years.”

The team were able to reveal the deeper history of Greenland by looking at isotopes of different elements in the rocks that are produced by exposure to cosmic rays, revealing how long they have been exposed to the air – or hidden under ice.

Glaciers scrape off underlying rock as they move, erasing the record of their own past. But by looking at fragments of these carved-off rocks deposited in ocean sediments around Greenland’s east coast, the team were able to peer further back into its history than rocks on the landmass can provide.

Dr Rood said: “It is amazing to me that such a small number of atoms can help solve a big problem– what is likely to happen to the second-largest ice sheet on Earth and how it is likely to contribute to rising sea levels.”