Currently Network Rail is investing billions in electrifying the UK’s train lines, this combined with increased renewable energy generation means train travel could be significantly decarbonised by 2050. However in many rural areas the electricity grid has reached its limit in both integrating distributed energy generation and supplying power to the train companies.

“What is particularly galling is that peak generation from solar and peak demand from the trains more or less match but we can’t connect the two,” says Leo Murray of 10:10, who is leading the Renewable Traction project. “I actually believe this represents a real opportunity for some innovative thinking.”

The team’s plan is certainly innovative and completely unique, connecting solar panels directly to the lines which provide electricity to trains. This will bypass the electricity grid so that the panels can provide power precisely when needed most. Although this sounds quite easy the team are the first to try it, it is not being done anywhere else in the world.

The work could have a wide impact with commercial applications on electrified rail networks all over the world. It would also open up thousands of new sites to small and medium scale renewable developments by removing the need to connect to the grid.

Initially the project will look at the feasibility of converting “third rail systems”. These supply electricity to the locomotive through a power line running close to the ground. They have the advantage of matching the way electricity is supplied by solar panels as direct current and using a similar voltage to the rail network of 750V DC. This system is only used on about a third of the UK’s tracks but the team feels that keeping it simple to begin with will pay dividends in the long run.

“Many railway lines run through areas with great potential for solar power but where existing electricity networks are hard to access,” explains Professor Tim Green, Director of Energy Futures Lab at Imperial College London. “I think that focusing on the basics of integrating distributed energy generators into a railway’s system with the third-rail network brings a lot of benefits.”

Concentrating on the third rail will the team to establish how to match the DC power of solar panels to DC railway lines without having to convert to AC in the middle.

Even with the ‘simple’ third rail system there is a lot of the team to worry about. Firstly, the third rail on most rail networks is also used for signalling purposes, so injecting power could lead to communications issues. There are also the issues around safety and integration of a secondary power source and managing how and when the solar power is being sent to the third rail. 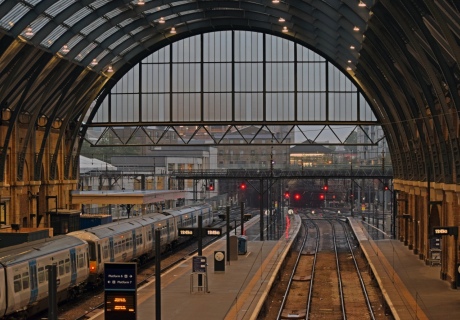 These technical aspects of the project will be a collaboration between researchers at Imperial College London and Turbo Power Systems (TPS). Imperial’s experience is on integration and management of renewable energy sources in electricity grids, while TPS work on the distribution and management of power in the railway sector. “TPS and Imperial really give us the full technical package,” says Leo. “We couldn’t have better partners to work out how we can integrate solar power with our trains.”

Technical integration is one thing but proving financial sustainability of these systems is critical. This is the part 10:10 and Community Energy South (CES) will play in the project. Investment in, and building of, solar power schemes was affected by changes in Government policy in late 2015 but confidence is creeping back in through Power Purchase Agreements (PPA). 10:10 and CES have wide ranging experience in community energy schemes and these kind of arrangements.

These long term PPAs are between reliable industrial consumers who can commit to buying every unit of the power generated by developers across multi-decade timespans. The problem is there are a limited number of sites that are good for solar panels and come with a long-term customer with high daytime energy use that is not going anywhere any time soon. Their work will help establish how big the market is for directly connecting renewables to transport systems.

“I don’t think you get a better fit for PPA than a train line,” says Leo.

“A rural train line even more so, the project would open up some many investment opportunities across the country and further afield.”

The Renewable Traction project will start on 1 February 2017. It is a collaboration between 10:10, Turbo Power Systems, Community Energy South and Energy Futures Lab. It is funded through Innovate UK’s Energy Game Changers programme. It will release the results of their feasibility study in Late 2017.