A type of drug used to treat weak bones is associated with an increased risk of 'micro-cracks' in bone, according to new research.

The early-stage research, by scientists at Imperial College London, suggests these microcracks may reduce mechanical strength of the bone.

In the study, published in the journal Scientific Reports, researchers studied bone samples from 16 people who had been diagnosed with the weak bone condition osteoporosis.

This research suggests that, in a small number of patients, rather than protecting against fractures bisphosphonates may actually may make bones more fragile.

The team then used X-rays from the Diamond synchrotron to visualize the structure of bone at a high resolution.

They found that the bones of people taking the drugs not only had a larger number of tiny cracks, but also had less mechanical strength.

The team said there is now an urgent need to further investigate these findings - though they stressed that patients should not stop taking the medication if they have been prescribed the drugs by their doctor.

Dr Richard Abel, lead author of the research from the Department of Surgery and Cancer at Imperial, said: "Although this is a very small, early-stage study, the results are quite startling, and justify follow-up studies.

"These microcracks are like the small cracks that emerge when you repeatedly flex a plastic ruler - they gradually weaken the structure and may potentially make it more prone to breaking."

Osteoporosis causes bones to weaken, making them more fragile and prone to breaks. The condition, which affects 3 million people in the U.K. and 200 million worldwide, usually strikes the over-65s.

The most common fractures are of the hip, wrist and spine.

Bone is regularly renewed throughout life, and constantly broken down and remade. But in osteoporosis, breakdown outpaces rebuilding.

This is due to the cells that break down bone, called osteoclasts, becoming over-active and burrowing holes, or perforations, into the bone.

Bisphosphonates slow the rate at which bone is broken down, by reducing osteoclast activity.

These drugs, for which there are thought to be around 6.5 million prescriptions every year in the UK and 190 million globally, have been found to prevent the risk of fracture by 30-50 per cent.

However, in recent years doctors have become increasingly concerned that the drugs may prevent breakdown to such an extent that in rare cases it may actually increase the risk of fracture.

This is because osteoclasts are needed to remove old, damaged bone so that it can be replaced with new bone.

However, if these cells become too sluggish, bones aren’t refreshed as often as they should be – which leaves them more prone to damage.

Cracks and perforations: About the study 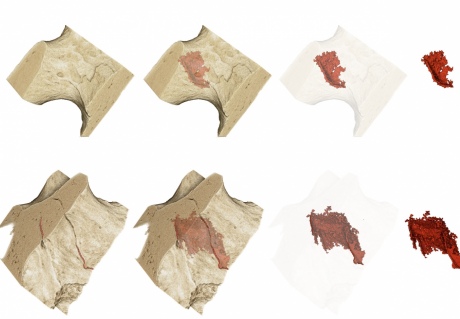 Micro-cracks inside bone samples from patients treated with bisphosphonate

To investigate this, the researchers in the current paper analysed the cracks and perforations in the microstructure of bone, which have rarely been studied.

This microscale structure of bone is not visible using standard X-ray equipment in labs or hospitals - which is the conventional way bone thinning is detected. Therefore, the researchers used a particle accelerator - the Diamond Light Source in Oxford - to analyse samples of bone.

These samples had been collected from patients during hip replacement procedures. The patients were between 60-90 years old.

The team also studied hip bone samples from patients who did not have osteoporosis and had not experienced a hip fracture.

They also tested the mechanical strength of the bone samples.

However, as expected, the bones of people who were taking bisphosphonates were also found to have fewer holes.

But despite this, the bones from patients treated with bisphosphonates were also found to be 33 per cent weaker than people who had suffered fractures but were not taking bisphosphonates.

The researchers used various mathematical models to confirm the differences were statistically significant.

Dr Abel explained: "This research suggests that, in a small number of patients, rather than protecting against fractures bisphosphonates may actually may make bones more fragile. We now urgently need larger studies to confirm this finding."

He added that further studies would also provide insight into whether there is an ideal length of time to prescribe the drugs.

"There may be a crucial time point between holes in the bone being prevented, and microcracks beginning to form. If we can find this, we may be able to ensure bisphosphonates provide maximum protection against fractures by personalising the duration of treatment.

"Long term we may need to develop other therapies that treat osteoporosis by building new bone rather than slowing the breakdown of old bone".

He said the team will now investigate whether microcracks form in patients who have taken bisphosphonates but not sustained fractures.

"Not only did we look at a very small number of samples in our study, but we also looked solely at patients who had suffered a broken hip. Further work needs to investigate whether the bones of osteoporosis patients who have not had a fracture also have these microcracks."

The study was funded by the Science and Technology Facilities Council, the Engineering and Physical Sciences Research Council, the Wellcome Trust and the Michael Uren Foundation.

“It is great to see how our visualization tools have provided an insight into the microcracks” says Professor Laurent Chapon, Director of Physical Sciences, Diamond Light Source.

“The X-rays used to map these usually help people engineering or environmental problems, so it is good to see how physical sciences’ tools have benefited medical research.” 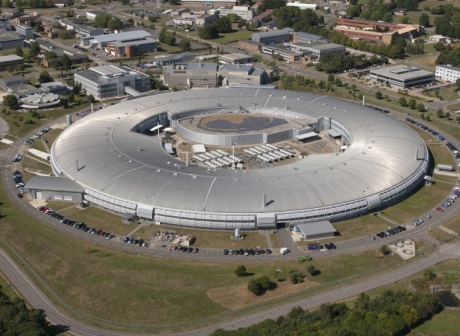