The skull of 'I'iwi, a Hawaiian honeycreeper that drinks nectar from flowers

A study of the super-diverse bird groups, which include Darwin's finches, has found that modular skull parts helped them adapt to different roles.

Adaptive radiation is the rapid evolution of many diverse species from a single ancestor. Typically this occurs in the colonization of island habitats, as a group of birds diversifies to exploit different ecological niches – the lifestyles, or roles, available within an ecosystem.

Two classic examples of adaptive radiation are Darwin’s finches - a group of species native to the Galapagos Islands which have different beak shapes depending on whether they feed on seeds, fruits or insects - and Hawaiian honeycreepers, some of which have long beaks adapted to feeding on the nectar of different flowers.

We are still learning about mechanisms controlling evolution of the animals that were so central to Darwin’s thinking about evolutionary theory.

Darwin’s finches were named after Charles Darwin, whose study of this group of birds played a central role in his research into evolution.

Previously, scientists have analysed the shape of beaks to understand how birds diversify and adapt to these specialist ecological functions. However, because the beak is integrated with the rest of the skull, examining beak evolution alone does not provide a complete picture of how these island birds have achieved such remarkable diversity.

In a new study, published in Philosophical Transactions of the Royal Society B, researchers compared the 3D structure of the entire skull in Darwin’s finches, Hawaiian honeycreepers, and in their common ancestral group, from which the two diverse groups are descended.

The authors performed X-ray microcomputed tomography scans (very fine resolution CAT scans) of hundreds of cleared and dried bird skeletons and fossils of extinct species to compare the external and internal structure of their skull.

They found that skull shapes are much more diverse in Darwin’s finches, and especially in Hawaiian honeycreepers, than in their ancestral group or in non-related groups of other bird species. This whole-skull variation was greater than the variation observed from looking at just their beaks. The finding suggests that variation of the entire skull plays an important role in the adaptive radiation of these birds. 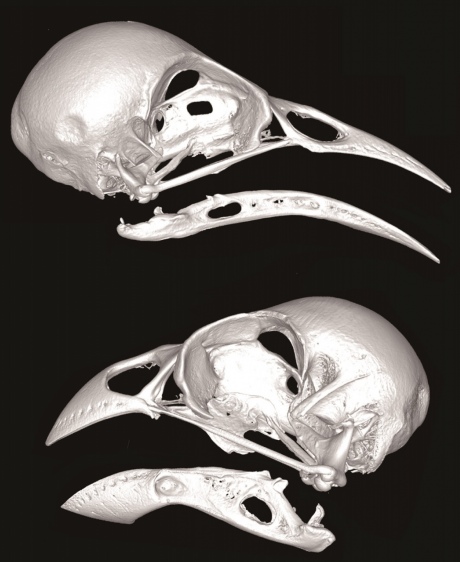 Furthermore, the authors demonstrated that skull diversity is greater when the component bones, such as the beak or the eye socket, are more independent of each other. The researchers think this is because when skull components are highly integrated, they impose constraints on components next to them, limiting their potential for evolutionary change.

In contrast, very modular skulls, like those of Hawaiian honeycreepers, allow for freer evolution of individual components. This results in more possible combinations and therefore a greater diversity of skull shapes.

The findings offer an important insight into the observed diversity of species. The leading author of the study, Dr Arkhat Abzhanov, from Imperial College London’s Department of Life Sciences, said: “By acquiring more flexible, modular skulls than their ancestors, these birds diversified very rapidly to colonise the islands.

“This raises the interesting idea that ‘evolvability’ can change and provide for additional opportunities under these conditions. We’ve found a developmental mechanism that influences how much variation can be generated in the population.”

The high ‘evolvability’ of these birds resulted in great variation, which was beneficial to colonise the range of diverse ecological niches that existed on islands such as Hawaii or Galapagos. This is important because it could explain why some groups of birds are much more diverse than other species of land birds inhabiting the same islands.

“We are still learning about mechanisms controlling evolution of the animals that were so central to Darwin’s thinking about evolutionary theory,” Dr Abzhanov said.

It’s not what you eat, it’s how you eat it

Comparison of the 3D scans also revealed surprising instances of convergent evolution between unrelated birds. Convergent evolution is the appearance of equivalent traits independently in more than one group, such as the similar body shape of fish and marine mammals, adapted for swimming.

Normally, this is attributed to an overlap in the ecological function. For example, if two unrelated bird species have adapted to the same diet, they can be expected to have a similar beak shape. Several families of songbirds have evolved long and curved beaks to drink nectar from flowers, including the hummingbirds and honeycreepers.

However, by comparing whole skulls instead of just beaks, the researchers revealed that it is how the beak is used for feeding, rather than what exactly they feed on, that matters.

Despite their different ecological requirements, in both cases evolution has shaped the skull for a particular mechanical function, in this case handling a hard food item. This insight may help explain a range of evolutionary adaptations observed in birds and other animals.